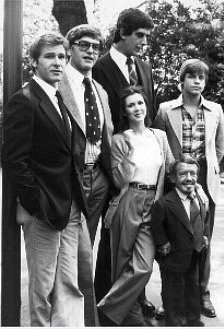 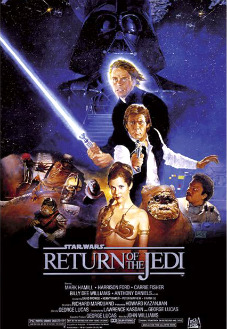 “Instead of bittersweet and poignant [Lucas] wanted a euphoric ending with everybody happy,” Kurtz recalls. “The original idea was that they would recover [the kidnapped] Han Solo in the early part of the story and that he would then die in the middle part of the film in a raid on an Imperial base. George then decided he didn’t want any of the principals killed. By that time there were really big toy sales and that was a reason.”

The ending of Jedi that Kurtz preferred “would have shown the rebel forces in tatters, Leia grappling with her new duties as queen and Luke walking off alone ‘like Clint Eastwood in the spaghetti westerns.’

But after helping to create the first two Star Wars films, Kurtz “became disillusioned with Lucas just before Return Of The Jedi, when he noticed that Lucas’ priorities had shifted away from story and character toward selling toys.

“Things apparently came to a head over the ending, which Lucas completely rewrote — all because, as Kurtz avers, it might have affected the merchandising — and which he outlines here to give you a glimpse of what might have been, had Lucas not been guided by the all-powerful Force known as Kenner.

“The emphasis on the toys, it’s like the cart driving the horse,” Kurtz says. “If it wasn’t for that the films would be done for their own merits. The creative team wouldn’t be looking over their shoulder all the time.”

This dovetails into my oft-repeated feelings about Lucas, which are basically that he’s the devil, which is to say a very real metaphor for total corruption of the spirit. He began as Luke Skywalker, having been described by biographer Dale Pollock as a kind of a brave and beautiful warrior when he was under the gun and struggling to make it in the ’60s and into the early ’70s. But once he got fat and successful he slowly began to morph into an amiable, goiter-necked, corporate-minded Darth Vader figure. I’ve been saying this since the late ’90s.