“Like many changes that are revolutionary, none of Washington’s problems happened overnight. But slow and steady change over many decades — at a rate barely noticeable while it’s happening — produces change that is transformative. In this instance, it’s the kind of evolution that happens inevitably to rich and powerful states, from imperial Rome to Victorian England. The neural network of money, politics, bureaucracy, and values becomes so tautly interconnected that no individual part can be touched or fixed without affecting the whole organism, which reacts defensively. 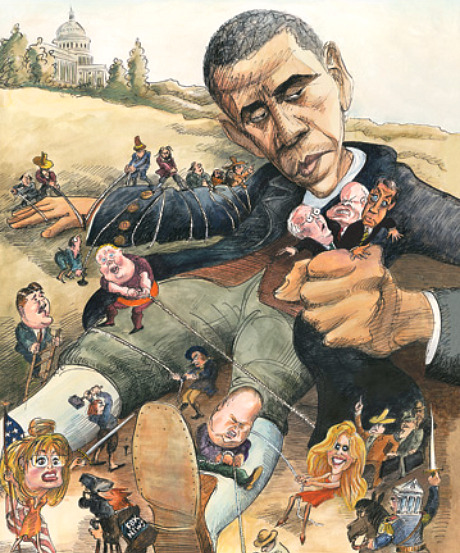 “And thus a new president, who was elected with 53 percent of the popular vote, and who began office with 80 percent public-approval ratings and large majorities in both houses of Congress, found himself for much of his first year in office in stalemate, pronounced an incipient failure, until the narrowest possible passage of a health-care bill made him a sudden success in the fickle view of the commentariat, whose opinion curdled again when Obama was unable, with a snap of the fingers or an outburst of anger, to stanch the BP oil spill overnight. And whose opinion spun around once more when he strong-armed BP into putting $20 billion aside to settle claims, and asserted presidential authority by replacing General Stanley McChrystal with General David Petraeus. The commentariat’s opinion will keep spinning with the wind.

“The evidence that Washington cannot function — that it’s ‘broken,’ as Vice President Joe Biden has said — is all around. For two years after Wall Street brought the country close to economic collapse, regulatory reform languished in partisan gridlock. A bipartisan commission to take on the federal deficit was scuttled by Republican fears in Congress that it could lead to higher taxes, and by Democratic worries about cuts to social programs. Obama was forced to create a mere advisory panel instead.

“Four years after Congress nearly passed a comprehensive overhaul of immigration laws, the two parties in Washington are farther apart than ever, and hotheaded state legislatures have stepped into the breach. Guantanamo remains an open sore because of fearmongering about the transfer of prisoners to federal prisons on the mainland. What Americans perceive in Washington, as Obama put it in his State of the Union speech, in January, is a ‘perpetual campaign where the only goal is to see who can get the most embarrassing headlines about the other side — a belief that if you lose, I win.’

“His chief of staff, Rahm Emanuel, whose Friday-afternoon mantra has become ‘Only two more workdays till Monday!,’ sums up today’s Washington in terms both coarser and more succinct. To him, Washington is just ‘Fucknutsville.’ — from “Washington, We Have A Problem,” a brilliant piece by Vanity Fair‘s Todd Purdum about the absurd dynamic affllicting the Obama administration.