Warner Home Video’s The Treasure of the Sierra Madre Bluray is the most exquisitely finessed, luscious-looking black-and-white film I’ve seen in high-def since WHV’s Casablanca. The needle-sharp detail and deep velvety blacks are magnificent. There are some dupey portions but nothing to worry about — most of it is pure pleasure. It’s so crisp and alive-looking, so perfectly honed and lighted that you can enjoy it entirely for the visual benefits alone. Which you wouldn’t want to do, of course, but I’m just sayin’.

A Toronto Film Festival interview with Let Me In director Matt Reeves that I thought I’d accidentally dumped was found today, so here it is. Middling iPhone-level video, tolerable sound, so-so chatter. But at least it wasn’t lost.

The only Star Wars film I’d like to see converted into fake 3D is The Empire Strikes Back. The best of the bunch, certainly the most handsomely photographed, etc. You can have the rest of them. And how good is the fake 3D going to be anyway? We’ve seen what it is, and that it doesn’t quite make it.

No, I’m not excerpting another Social Network rave. I’m quoting a piece of a review by Time‘s Richard Corliss because the description he offers of genius innovators like Mark Zuckerberg is sly and zingy and exactly right. The film is saying that “geniuses are abnormal,” Corliss states. “The obsessive focus that these blessed, cursed minds bring to their goals often excludes social peripheral vision. They don’t notice, or care about, the little people in their way. Zuckerberg, incarnated by Jesse Eisenberg (The Squid and the Whale, Zombieland) with a single-mindedness so cool as to be lunar, isn’t inhuman, exactly; more post-human, a series of calculating algorithms. He is his own computer code — complex, and to most of those who know him, unfathomable.”

First the Segway guy flies off a cliff and into a river and dies, and now editor Sally Menke, 56, has lost her life from a similar-type accident, possibly from succumbing to heat exhaustion and falling off a cliff (or a steep ravine) during a hike in Griffith Park. I’m very sorry. Menke was a gifted cutter and way too young.

But there’s no stopping unforeseen bad stuff in this life. I wish it were otherwise. A friend once said that the odds of leaving the planet in a quiet and peaceful way are not high. It’s a much greater likelihood that death will come either suddenly and horrifically, or at the end of a long, agonizing, painful decline from disease or age deterioration.

In the third act of A Clockwork Orange, Patrick Magee‘s agitated liberal-activist character — white-haired, ruddy-faced, excitable — is phone-chatting with a superior about the necessity of leadership. “The common people will let it go,” he says. “Oh yes, they’ll sell liberty for a quieter life. That is why they must be led, sir…driven, pushed!”

I am Patrick Magee, and this is more or less my view of the older, reputedly lazy Academy fuddy-duds. “The older Academy members will too often bypass true quality and reward films that offer the usual familiar comforts. Oh, they’ll give it all away for a calmer, warmer, more reassuring experience. That is why they must be led, sir…driven, pushed!”

Bluewater Productions has announced a forthcoming “Mark Zuckerberg: Creator of Facebook” comic book Written by Jerome Maida, penciled by Sal Field and cover designed by Michal Szyksznian, the 48-pager will be out in December. 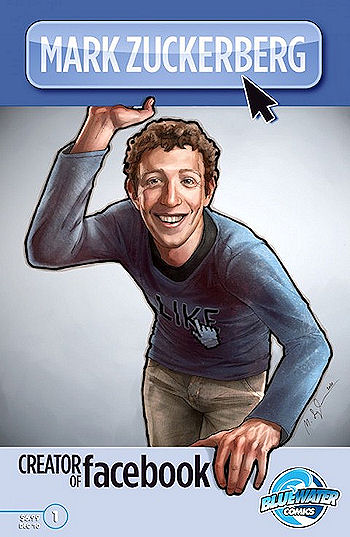 “Who is the real Mark Zuckerberg?,” the press release asks. “The young billionaire and creator and CEO of Facebook who announced recently that he is generously donating $100 million to public schools in Newark? Or the cold-blooded businessman who walks over people to get what he wants — the way he’s portrayed in The Social Network?

The road to success, Maida says, was not preordained nor was it always a smooth ride.

“Mark was offered loads of money at a young age and turned all his suitors down because deep down he knew he had higher goals than to work for someone else,” says Maida. “Bill Gates offered Mark a million dollars while Mark was still in high school to work for him and Mark turned it down. I mean, how many high school kids will ever be made an offer like that?

“Rightly or wrongly, Mark dealt harshly with some people on his way to where he is today”, says Maida. “As we see, he left many people feeling betrayed. I try my best to be fair here. No one is totally innocent in this story. I try to represent each of the major players’ point of view.”

From 11:30 am to 1:30 pm I took part in a press luncheon/schmooze session at Manhattan’s Essex hotel for the forthcoming Bluray of William Friedkin’s The Exorcist (due 10.5). It was pouring outside and the Bluray hadn’t been sent out (it won’t be ready until 9.30), but it was very cool to chill and shoot the shit with Exorcist writer-producer William Peter Blatty, dp Owen Roizman, costar Linda Blair and sound designer Chris Newman.

Where was Friedkin? Upstairs and hanging around (he dropped by for a quick hello and a photo-pose with Blatty) but he didn’t sit down for whatever reason.

I especially enjoyed watching the first 30 or so minutes of the Exorcist Bluray on a large plasma screen. I haven’t seen it look this good since I forget when, and I just like watching first-rate movies under first-rate conditions. The Exorcist Bluray looked extra-cool, I thought, because it was shown through a 240hz frame-rate converter, which lent an almost video-like clarity to the image.

There’s a special digital screening of the film happening tomorrow night at MOMA. 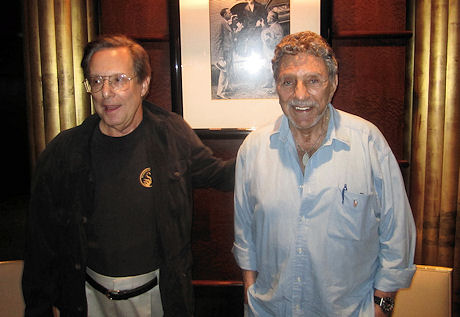 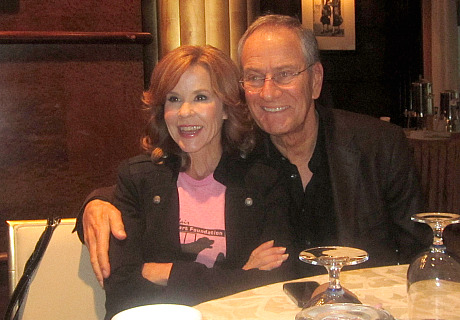 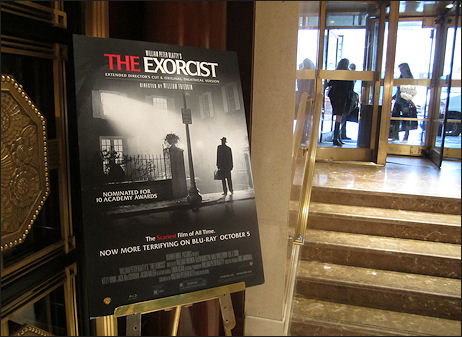 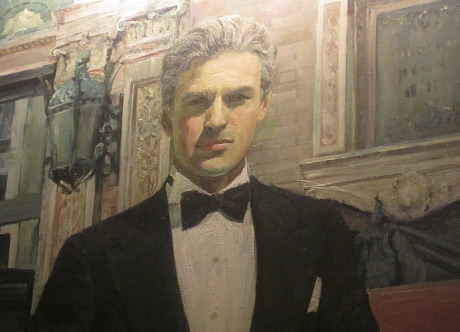 A fantasy painting of Robert Redford as Jay Gatsby inside the Hotel Essex. The weird part is that the painting obviously depicts Redford’s hair as blond and swept back, despite the fact that his hair was dyed brown and close-cropped for the film. 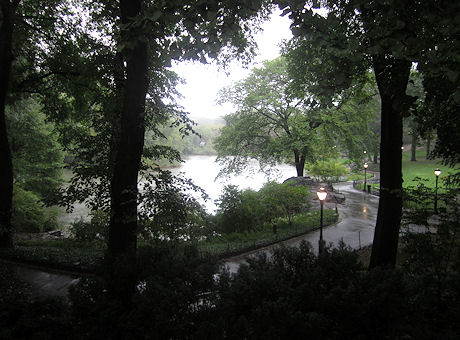 Yesterday morning Envelope/Gold Derby L.A. Times guy Tom O’Neil said that The Social Network “has a quality that gives it an edge in the current derby: It reflects the national zeitgeist during this Age of Facebook… Oscar voters want their best pictures to say something important about our times.”

In response to which Rope of Silicon‘s Brad Brevet said that he likes the “cultural and cinematic card” (i.e., championing films that clearly reflect present-tense realities and conditions), as this would have earned The Dark Knight a nomination (and perhaps even a win) over such films as The Reader, Frost/Nixon and Milk. It would have earned WALL*E a nomination. It would define the Academy and the Oscars as progressive rather than regressive and stagnant.

“The past few years of Oscar predictions have become quite boring as the conversation leading up to the show pretty much dictated the winners,” he continues. “Could it be the same again as the Social Network crowd reaches a fevered pitch?” While The Social Network “speaks squarely to the heart of the Gen-Y crowd” and The King’s Speech is “the one film that’s right up the Academy’s alley,” the game will be affected this weekend by Social Network ticket sales ” “another bullet point for the conversation to focus on.”

However, says Brevet, “true cinematic advancement in the Best Picture field won’t come with a Social Network win. Something like Darren Aronofsky‘s ballet thriller Black Swan or Christopher Nolan‘s Inception would mark an actual step forward. Will Nolan get the requisite ‘he deserved it’ Oscar for Batman 3, diminishing its cultural and cinematic significance? And when will one of Aronofsky’s forward-thinking features get the recognition it deserves?

Yesterday L.A. Times columnist Patrick Goldstein, writing from a standard city-desk, big-city-newspaper, shoe-leathery perspective, cast doubt upon the general cred of The Social Network by sugggesting that its portrait of Mark Zuckerberg is, in the words of Facebook Effect author David Kirkpatrick, “horrifically unfair.”

One retort (which also posted yesterday) came from New Yorker critic David Denby. He says in his Social Network review that “the debate about the movie’s accuracy has already begun, but David Fincher and Aaron Sorkin, selecting from known facts and then freely interpreting them, have created a work of art…accuracy is now a secondary issue.”

“Movies tend to exaggerate retellings of true-life stories for dramatic emphasis, and…like, whatever, Francis Bacon wasn’t a naturalist,” I wrote a few weeks back. “Welcome to the art world. People want strong points of view, and basically to see the non-provocative stuff pruned down so the provocative stuff can be savored all the more, and so the core issues confronting characters can be addressed in some detail. Didn’t William Shakespeare play more or less by these rules?”

Biutiful‘s submission as Mexico’s official entry for a possible Best Foreign Language Feature Oscar is a big boost. A sad but vivid lower-depths drama with a knockout Javier Bardem performance, it now has a niche that will give it traction all around. I toppled hard when I saw it in Cannes, comparing it to Italian neorealist cinema and so on. Which is why I was stunned and enraged when the Guy Lodge contingent sauntered into the Orange press cafe going “nyick, nyick, nyick, nyick.”

I’d written director Alejandro Gonzalez Inarrritu yesterday afternoon about the news, and he confirmed early last night. He noted that “Academy members were really impacted and proud,” and that “their strong support and response makes me very happy.” Good to go.