Just a reminder to go to iTunes and subscribe to Oscar Poker (podcast #2 coming up next Sunday night) and perhaps leave a rating. “He readers doing this will help your visibility within iTunes,” my tech guy says. If the previous link doesn’t work, try this one.

What are the ten most damaging takedown strategies that The King’s Speech distributor Harvey Weinstein could launch against The Social Network, his film’s current chief competitor for the Best Picture Ocar? The relentlessly-on-the-case Vulture has come up with a half-serious, mildly amusing checklist. 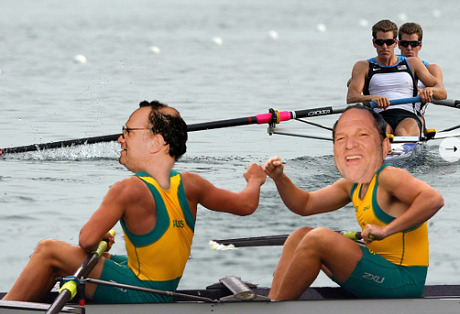 The two funniest suggestions: (a) Do a Norbit on Timberlake — Just before the nomination deadline, remind the industry that Social Network Best Supporting Actor contender Justin Timberlake has a voice role in Yogi Bear, which will presumably give King’s Speech Best Supporting Actor contender Geoffrey Rush an advantage. And (b) Do a Mo’Nique on Jessie Eisenberg — “In recent interviews,” the rationale goes, “The Social Network‘s Eisenberg — competition for King’s Speech‘s Colin Firth for Best Actor — has hinted that he’s slightly uncomfortable with all the attention the role is getting him. Does he even want an Oscar? Is he the next Mo’Nique? Questions that must be asked! Preferably by complicit Oscar bloggers!”

Deadline‘s Michael Fleming is reporting that Fox 2000 and Universal are making seven-figure bids on an original Beach Boys musical, based on a pitch to be written by Susannah Grant (Erin Brockovich). Pic will reportedly “craft a storyline with the surf and fun prevalent in the band’s many hits.” In other words, a Beach Boys version of Across The Universe? Fleming’s kiss-of-death closer: “The template for the film is to do with the Beach Boys catalog what Mamma Mia! did with Abba.” Good God.

One thing about Let Me In (Overture, opening today) that’s getting through to moviegoers who read movie blogs or reviews is that it’s only superficially a “horror film.” The horror genre belongs to the wallowers and the animals and the Eli Roth-fiends, and this is a film that some genre fans are going to feel confused by. Why aren’t there more boo scares? Why isn’t there more of a sense of an accelerating nightmare? Why do the characters speak so softly to each other?

Let Me In is too good, too classic-minded, too well acted, too sensitive and too gradually paced to qualify as a “horror film,” or at least what that term tends to mean in the minds of most moviegoers. It uses the trappings of horror — vampires, drinking of blood, killings, ominous atmospheres — but it’s about love and loneliness and the needing of emotional comfort by children (okay, tweeners) whose families have fallen away and failed to provide.

Please take note of this, Academy members. There hasn’t been a “horror film” nominated for Best Picture since The Exorcist (forget the feminist-minded psychological FBI thriller The Silence of the Lambs), but the time has come to go back to this dark well and let a horror film “in” by nominating it for Best Picture. You can refuse to consider this film because it adheres to conventions of what you regard as a disgraced genre, but you really, really shouldn’t do this. Not this time.

Boiled down, Let Me In is a highly unusual and deeply affecting young-love story. It’s been made with restraint, sensitivity and high levels of intelligence. Please open your minds and don’t throw the baby out with the bathwater. Director Matt Reeves has created a distinguished exception to the rule.

Again — how fresh or stunning can a presumably better, more delectably photographed, Charles Portis-novel-adhering version of True Grit be? Okay, better than Henry Hatahaway‘s 1969 film…and? No matter how righteous the Coen Bros. sheen, it’ll still be True Grit — raunchy blowhard Reuben (not Rooster) Cogburn matching wits with Mattie Ross. I expect nothing but quaalude highs, but what can it finally add up to? People are having advance heart palpitations, and I’m not so sure. (Kris Tapley‘s In Contention had it first.) 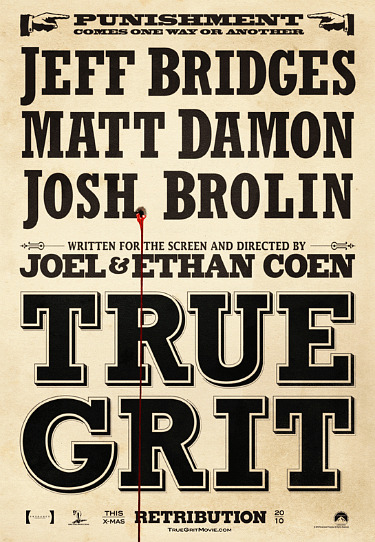 “You might want to ask your readers about audience reactions to Let Me In starting today,” says HE reader Christian Hamaker. “I saw it last night with a large contingent of press, but also a sizable audience of regular moviegoers. And the reactions to this film were perplexing.

“At one point, a frustrated critic behind me shouted to the other audience members, ‘Shut the f*%k up!’ I think he spoke for several of us who appreciated the movie’s artistry.”

A powerful metaphor from the mind of F. Scott Fitzgerald looms large in Shawn Levy‘s review of The Social Network in The Oregonian as well as Ann Hornaday‘s review in The Washington Post:

Levy: “Indeed, as in David Cronenberg‘s The Fly, when a drunken lovers quarrel leads the hero into a rash act that changes him forever, Aaron Sorkin‘s Mark Zuckerberg sets down the path that will eventually lead him to billions while soaking in a beer-fueled snit fit at a girl (Rooney Mara) who won’t have him. In a sense, all that follows — the programming marathons, the less-than-above-board business dealings, the efforts to position the web site and turn it into a phenomenon — is spurred by Zuckerberg’s yearning for this dream girl. She is Daisy Buchanan to his Jay Gatsby, and the green light on a distant dock has morphed into the refresh button on a Facebook page.”

Hornaday: “What ensues is a narrative that hews closely to classic American tales of ambition, ingenuity, competition and betrayal; The Social Network has understandably been compared to Citizen Kane in its depiction of a man who changes society through bending an emergent technology to his will. But with its leitmotif of striving, resentment and cherchez la femme, the story also evokes Fitzgerald at his most longing and elegiac. A modern-day Jay Gatsby, the ‘refresh’ button on his keyboard standing in for Daisy Buchanan’s flashing green dock light, Zuckerberg — or at least Sorkin’s version of him — embodies all those timeless contradictions and of-the-moment tics (the hoodie, those flip-flops) that make for a classic literary anti-hero.”

It feels very strange to sympathize with Paris Hilton, but paparazzi are a pestilence. Watch this video and tell me what happened here (fat female paparazzo with plaid shorts has her foot run over when Hilton’s boyfriend inches his car forward) as a hit-and-run incident is delusional. Stuff happens, just desserts. 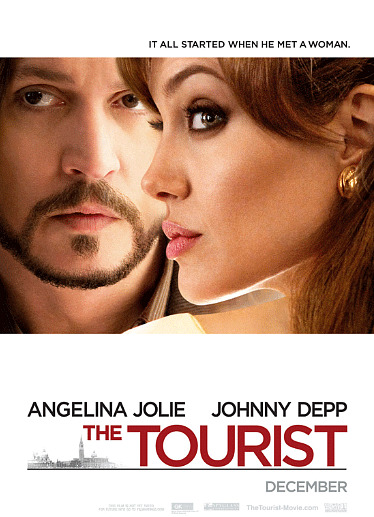