Yesterday Alison Willmore posted a smart, incisive reply to feminist Social Network haters on IFC.com. The film “doesn’t present a world in which women are ‘all gold-diggers, drunken floozies and that ‘bitch’ who got away,” she wrote. “It presents one in which [the] main characters do everything possible to meet girls except actually go out and meet them. 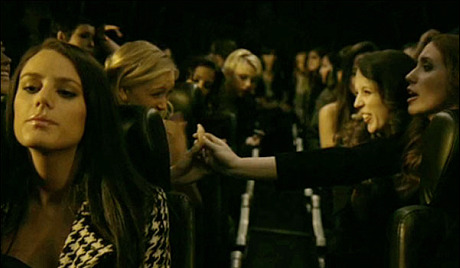 “That ridiculous party that’s juxtaposed with Mark’s assembling of Facemash.com isn’t meant to be a feasible depiction of what life in the final clubs is like — the members order in kegs of beer and kegs of ladies. It stands for everything Mark thinks he’s missing out on, the debaucherous good time the elite are surely having while he sits at home stewing in his own self-loathing. What would he even do if he was invited? He’d just sit in the corner with his laptop.

“Mark Zuckerberg, or at least the Mark Zuckerberg of the movie, embodied by Jesse Eisenberg, finds the seeds of his company in the type of obscurely vengeful thought we’ve all found consolation in at one time or another — ‘You’ll be sorry when I’m famous/dead/beautiful/successful/rich!” What’s tragic about Zuckerberg is that even as he builds the company that will become a part of the lives of half a billion people, that will make him the world’s youngest billionaire, he’s still just a closed-off workaholic who has trouble relating to people, and his ex isn’t going to come crawling back because of his achievements.

“We don’t see women around much in general in the film because our main characters have no idea how to meet or pursue or talk to them. The smart, grounded girl the film starts out with — Rooney Mara‘s Erica Albright — walks out on the asshole she’s been dating after he simultaneously ignores and talks down to her. It’s an affirming moment, but we don’t go with her, because it’s the asshole that The Social Network is about.”