Clint Eastwood‘s Hereafter isn’t just a critical bust. I think it’s his least satisfying film since Firefox (’82). Perhaps the biggest letdown aspect is that it doesn’t impart a sense of tranquility or acceptance about what’s to come, which is what most of us go to films about death to receive, and what the best of these always seem to convey in some way. 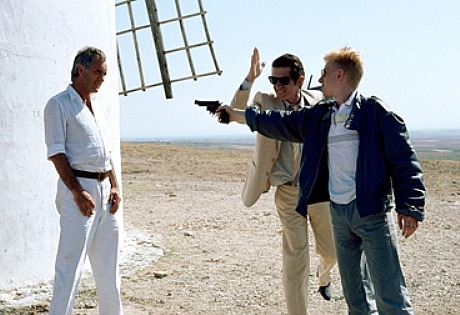 They usually do this by selling the idea of structure and continuity. They persuade that despite the universe being run on cold chance and mathematical indifference, each life has a particular task or fulfillment that needs to happen, and that by satisfying this requirement some connection to a grand scheme is revealed.

You can call this a delusional wish-fulfillment scenario (and I won’t argue about that), but certain films have sold this idea in a way that simultaneously gives you the chills but also settles you down and makes you feel okay.

Here’s a list containing some top achievers in this realm. I’m not going to explain why they’re successful in conveying the above except to underline that it’s not just me talking here — these movies definitely impart a sense of benevolent order and a belief that the end of a life on the planet earth is but a passage into something else. I’ve listed them in order of preference, or by the standard of emotional persuasion.

I’m also giving a pat on the back to that old Twilight Zone episode called “Nothing in the Dark,” in which Robert Redford played a kind of angel of death in the guise of a wounded policeman.

For me the four worst films about death — the shallowest and most phony-manipulative and least reassuring — are Ghost, Flatliners, What Dreams May Come and Death Becomes Her. These are movies that pull down their pants and play cheap little games for the enjoyment of those in the audience who are scared shitless of death and need to fantasize or joke about it in order to allay their fears.

And the single most terrifying film about death as envisioned by fundamentalist Christian wackos is Michael Tolkin‘s The Rapture. One look at that film and you’ll be able to at least consider the idea that hardcore Christians have taken something naturally serene and peaceful and created a terrifying new-age mythology that would give Satan pause.

Update: I don’t know why I forgot to mention Wim Wenders ‘ Wings of Desire. Because it’s doesn’t fit the mold, I suppose. It’s not about passage from life to death as much as passage from death to life, being about an angel (Bruno Ganz) who falls in love with a circus girl (Solveig Dommartin) and wants to be mortal so he can experience love and pain and all the rest of it.