Last night I saw the final, slightly shortened cut of Derek Cianfrance‘s Blue Valentine at the Hamptons Film Festival. It’s about ten minutes shorter than the Sundance version I saw nine months ago, and it really got sunk in this time around. Call me a flake if you want, but it’s a cleaner and less mannered film now, and I felt curiously touched and moved by it even. Certainly by the acting.

This is a Best Picture candidate, I now feel, and Michelle Williams is a Best Actress contender, for sure. I suppose I was so distracted the first time around by Gosling’s intense but curiously mannered performance that I couldn’t see the forest for the trees.

Maybe my initial reaction was due in part to Sundance exhaustion (which can lead to a kind of fuck-all peevishness), but somehow the neo-Cassevetes vibe seemed to amount to much more this time.

My Sundance ’10 review wasn’t exactly a pan. I called Blue Valentine “a pretty good film made by some undeniably talented folks who would rather shoot themselves than make another relationship movie in the same old way.” I expressed irritation with Gosling (“always doing that rob-bop-a-loo-bop, always focused on behaving in his own particular way and making damn sure that we notice this”) but I didn’t convey disdain or disrespect for Blue Valentine as a whole.

Gosling is a trip though. I met Cianfrance at a party late yesterday afternoon, and it hit me finally that Gosling has literally based his performance on an imitation of Cianfrance — particularly the director’s high forehead, thinning-hair coif (in those parts of the film in which Gosling is playing “older”) and his dese-dem-dose patois. On its own terms the performance is still bothersome in certain ways (the fact that Gosling smokes about 87 cigarettes during this film, several of them while carrying his daughter around, drives me up the wall) but at least I get now what he was doing, weird as that may sound.

In any event, the new Blue Valentine is proof that making a film shorter really can lead to salvation from time to time. It was trimmed, of course, at the urging of distributor Harvey Weinstein, and as such is now one of the best arguments for the Harvey Scissorhands approach that I’ve ever seen. 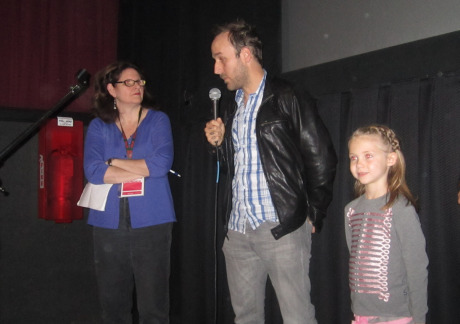 Here are portions of the January 2010 review that I still stand by:

“[This] is an old-fashioned arthouse relationship movie with next to no story but an intensely observational art-bubble thing going on in which we’re shown a relationship between Ryan Gosling and Michelle Williams in two time periods — young, hot and feverishly in love and somewhat older, frustrated and not in love or certainly less so.

“For the most part Blue Valentine is about Cianfrance showing off his John Cassevetes chops — one deep invadin’, high falutin’ close-up intimacy moment after another with the camera doing the old duck-and-weave.

“It’s basically about Gosling and Michelle Williams giving us their acting-class utmost as a couple of not-very-bright instinctuals who want each other and lah-dee-dah-dee-dah and then they’re older and life is harder with the burden of the cute little daughter and all. I couldn’t tell what was wrong except for Williams being frustrated with Gosling’s blue-collar complacency and Gosling going ‘whassa matter?….wait, wait, whassa matter?’ and smoking so many damn cigarettes (even while holding his daughter) that I wanted to pick him off with a high-powered rifle.

“Gosling is inventive and never predictable, and I’m going to loathe him for years and years to come for this very nimbleness, this determination to imprint and infiltrate each and every film he’s in with a Ryan Gosling mood spray. He’s a behavioralist who lives inside a very deep mine shaft, and when he takes over a movie (as he does this one) you’re suddenly deep in that mine with him and noticing that air is thin and wondering why but feeling it might be time to get the hell out of there, and yet knowing this would be heresy because Gosling is, at the end of the day, a very intense presence with a very shifty bag of tricks that most other actors would never devise, much less resort to. I mean that in a half-flattering way.”

At the end of my Sundance review I wrote that “there’s never a moment in which you’re saying to yourself ‘this is crap, I can’t take this.’ What you’re saying is ‘this a high-end thing made by some fiercely committed people, and I can barely stand it.'” I didn’t feel that way last night. Instead I was saying to myself, “You let your Sundance fatigue get the better of you to some extent, and to a large extent it’s now a better film with some of the indulgences removed.”