Criterion’s recent confirmation that they’ll release a Bluray/DVD of James L. Brooks‘ Broadcast News in January 2011 suddenly reminded that I haven’t felt any How Do You Know intrigue in a while. I mean, the trailer is okay (although it does make the film seem a little thin and sitcommy) and it’s coming out on 12.17 but it’s just kinda lying there. I’m not hearing a drumbeat that says “hey, we’ve got something really awards-season special here.”

Will the Broadcast News Bluray, arriving with a motive right in the midst of Oscar balloting, remind people what a masterful director-writer and emotional button-pusher Brooks still is, or what he used to be in the ’80s and early ’90s before his game went soft? Will How Do You Know earn a place alongside Broadcast News, Terms of Endearment and As Good As It Gets, or will it be another Spanglish?

An HE reader named “Webster” wrote the following this morning: “I saw How Do You Know at a screening in Orange County last week. (No end credits at the screening — still being massaged.) What I saw started a little slow, but really picks up steam midway through and ends strong. In a five-slot race, I wouldn’t give it a chance for a Best Picture nomination, but with 10 slots…who knows?

“The guy who delivers the good is Paul Rudd. This will raise his profile to the A-list. This is a guaranteed Best Supporting Actor nomination.

“ Reese Witherspoon is a little hard to warm to at first, but is fine; and Owen Wilson plays to his strengths, although I never really bought him as a $14 million-a-year pitcher — we never see him on the mound. And Jack Nicholson is Jack — with one huge laugh-out-loud Jack moment in the movie’s ‘money’ scene inside a hospital room.”

Brooks never shows Wilson throwing a few from the mound? Why?

The Broadcast News Bluray will feature (a) a restored high-definition digital transfer, (b) audio commentary rom Brooks and editor Richard Marks, (c) deleted scenes and an alternate ending, (d) a “new documentary” on Brooks’s career, (e) a “new video interview with veteran CBS news producer Susan Zirinsky, one of the models for actress Holly Hunter’s character and an associate producer on the film, and (f) a booklet featuring an essay by Philadelphia Inquirer film critic Carrie Rickey. 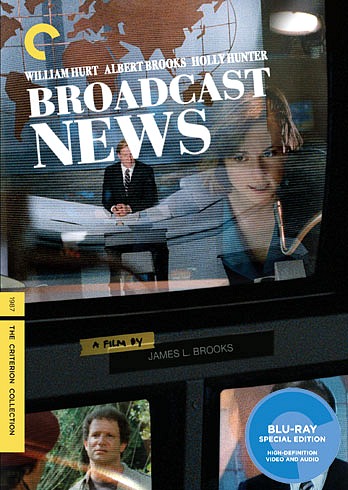