Salon‘s Matt Zoller Seitz feels that The Hangover 2 cast is guilty of hypocrisy (or certainly inconsistency) for shunning Mel Gibson while giving a wink and a pass to Mike Tyson, who cameo’ed in the first Hangover film. And that Hollywood itself has pulled the same crap by looking the other way when it came to the transgressions of Alec Baldwin, Elia Kazan, Charlie Sheen, Kate Moss, Roman Polanski and Lindsay Lohan. 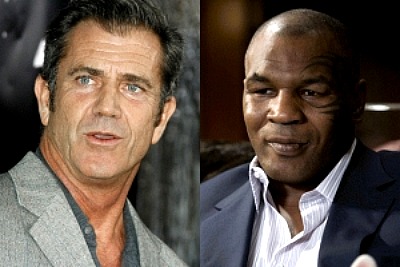 “I don’t care how horrendously a person behaves behind closed doors,” Seitz writes. “Knowing what swine they are informs but does not veto my appreciation of their work, if in fact I appreciate that work to begin with, and even if I don’t, the gossip, arrest reports and tortured personal history add flavor to what I know, or think I know, about what such people do and represent. But the private melodrama never becomes the whole story for me — partly because of that whole, pesky ‘judge not lest ye be judged’ thing, but also because when we feast on these headlines, we’re treating selective knowledge as the whole story.

“We have no idea whether Tyson, Gibson, Baldwin, Lohan, Moss or anyone else are truly among the worst-behaved creative types in the entertainment industry, or just the ones that happened to get caught.”