A month ago I reported about a “dark and murky-looking” screening of The Social Network for Boston-area critics at the notorious AMC Boston Common plex. This resulted in a Sony rep calling it “a projectionist error” and a pledge to set “a new screening as soon as possible for those who attended.” Naturally, nothing has changed. The Boston tipster who told me about the 9.20 TSN incident says that recent press screenings of Hereafter, Fair Game and 127 Hours have also been degraded at the same theatre by cruddy AMC (i.e., “All Movies Compromised”) technology. 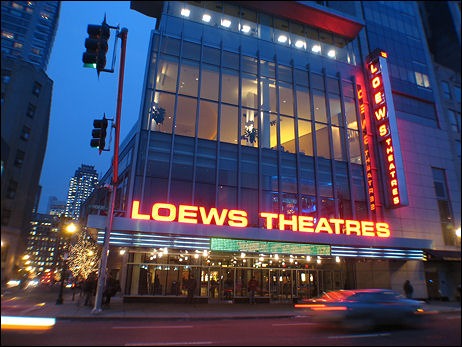 “Hereafter was screened for Boston press on Monday evening — screen #18 at the AMC Boston Common plex — from the very same Sony 4K projector that caused the problems during that 9.20 screening of The Social Network,” he writes. “The 3-D lens was still in place and, once again, it appeared as though we were watching a bootleg copy instead of a real movie. Simply atrocious.

“It gets worse. Both Fair Game (which screened on the afternoon of 10.12) and 127 Hours (screened on the morning of 10.6) were projected from a Christie 2K in theatre #8 at the theater. Yes, the Christie is regarded as a superior projector. However, the Christie used in this room is one of the very first digital projectors the AMC plex installed, and the image it currently outputs is broken.

“Reds and greens constantly separate, vertical streaks (complete with mottling toward the center) appear through the image and, in the case of 127 Hours, there was visible red/green artifacting cropping up (colored blocks within those vertical lines).

“Now, given that 127 Hours director Danny Boyle and dp Anthony Dod Mantle were using their standard variety of digital cameras, I wasn’t entirely sure that some of the imagery wasn’t intended to appear distressed (especially the consumer-grade — circa 2003 — handycam footage shot by James Franco‘s character). However, a subsequent screening at a different Boston theater — the Regal Fenway 13, with Boyle on hand for a post-movie q & a session — featuring supremely clear imagery erased these doubts.

The source adds that “we lucked out, as the Fenway theater has also had its share of technical problems.”

“With Fair Game the periodically-appearing subtitles, which should have been white, had a bizarre series of — yes — red and green diagonal hatch marks running through them, in addition to the same red/green separation issues mentioned above. In one late-inning scene Sean Penn is dressed in a brown pin-striped suit jacket, except the pin stripes broke up into a moire pattern, the likes of which you haven’t seen since people appeared in pin-stripes on old CRT televisions.

“If you bought a new TV and witnessed these kinds of abnormalities on screen, you’d return the TV and demand either a replacement or a refund. And yet, consumers regularly view movies under these conditions, accepting the terrible image as the way it should be. What’s wrong with this picture?”

Wells to Boston tipster: What’s wrong is that AMC management has apparently decided that it’s just too costly to project films correctly. The exhibition business is not booming. They’d like to upgrade their standards but they just don’t want to pay for it.

Why do people sit meekly through poorly-projected theatre showings but turn around and demand complete satisfaction from their TVs? Primarily because the size of the investment in their home entertainment systems is much higher than the price of two movie tickets, and because problems with their TV will obviously plague their viewings on a day-to-day basis whereas they’ll accept single-incident screwings (even if they’re endlessly repeated) at crap plexes like the AMC Boston Common 19. People are basically sheep when it comes to bad theatrical projection — they’ll sit through anything. And theatre owners know this.