Boiled down, Michael Cieply‘s 10.21 N.Y. Times article reports that a solution has been found regarding Michael Douglas‘s performances in Anchor Bay’s Solitary Man and 20th Century Fox’s Wall Street 2 being possibly competitive in the Oscar derby. 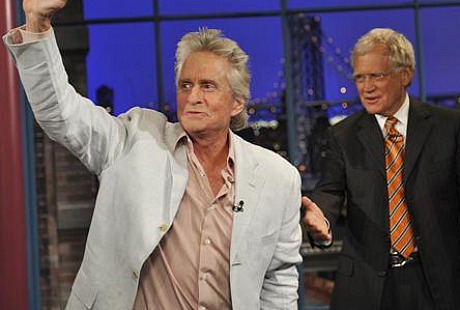 “After toying with the idea of promoting Mr. Douglas as a leading man for his work in Wall Street 2, Fox executives in the last few days have leaned toward putting him in contention as a supporting actor,” Cieply writes. “That would stave off a potential conflict with Solitary Man, in which Mr. Douglas is clearly the lead, and with Anchor Bay, an independent company that has not previously been a major player in the Oscar game but is serious about it now.”

And what will most likely happen is that Fox’s Best Supporting Actor campaign will dominate, in part because Wall Street 2 is a bigger attention-getter than Solitary Man, and in part because many feel a sentimental attachment to Douglas’s original Gordon Gekko performance in Oliver Stone‘s 1987 Wall Street.

Douglas’s longtime publicist Allen Burry tells Cieply that his client is “doing well” after going through “a grueling course of radiation and chemotherapy that lasted for eight weeks,” adding that he “underwent the last, and heaviest, of the chemotherapy sessions only last week.” The “residual effects will probably put him under wraps again until at least the end of November,” Cieply explains.

And yet Douglas hopes to be ready for the public again “by the time the awards galas are in full swing,” Burry says.