Almost all documentaries are about some historical event, recent or not, or some evolving socio-political trend. Banksy‘s Exit From The Gift Shop is therefore a serious standout because it’s an exceptionally perceptive film about art and culture as currently configured. It’s simultaneously about (a) how art, once the calling of a relatively select fraternity, is now open to anyone with energy and chutzpah, regardless of how good they may be, and (b) the fact that this is happening not only because art-world “taste” is devolving, but the standards and sensitivities of an entire culture. 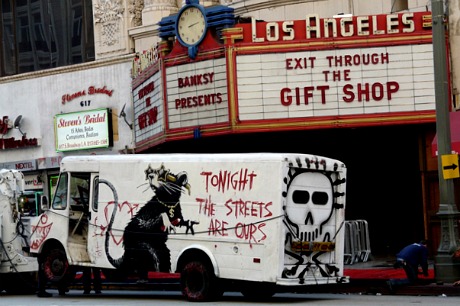 Gift Shop, in short, is a really important film that’s about everything that’s going on right now, including the degradation of movies themselves. Which, given the generally behind-the-times, slow-on-the-pickup nature of the typical voter for Academy documentaries, means that Exit From The Gift Shop is looking at an uphill fight to even get on the doc shortlist. Naturally. Or so says TheWrap‘s Steve Pond, who’s written a piece that explains why.

The best explanation comes from blogger, cultural seer and co-chair of the CinemaEye Honors AJ Schnack. “The hardest thing for a film like Exit Through the Gift Shop will be getting onto the shortlist,” he tells Pond. “I expect it to get nominated if it gets on the shortlist, and if it gets nominated it could even win. But its biggest wall to climb will be getting on that shortlist.”

The reason, a documentarian says, is that “the people who are really doing the work are not the ones who vote. And the ones who do vote just don’t understand what’s going on in the field these days.”

As a result, says Schnack, the field is “stacked against docs that aren’t old-fashioned and traditional, at least in the early rounds.”

The basic conditions are as follows, Pond reports. (1) “Documentaries are judged by surprisingly few people”; (2) “The most active filmmakers are ineligible or unable to vote”; and (3) “The final slate of nominees is almost invariably made up of issue-oriented docs — to the exclusion of the odder, entertaining works that make the field so vital these days.”

“In mid-November, when the Academy releases its shortlist of feature docs that will remain in contention for the Oscar, it’s a near-certainty that some eminently deserving films will be left out.

Besides Exit From The Gift Shop, the “likeliest to be snubbed,” says Pond, are Joan Rivers: A Piece of Work and Catfish and Louder Than a Bomb. Wait — what’s Louder Than A Bomb?

The Academy has “made a lot of internal changes, and the system is definitely better than it used to be,” says Schnack, “but I would argue that the folks who are really contributing to the field, who are responsible for what’s really happening in non-fiction film these days, are not participating.”