Yesterday Movieline‘s Stu Van Airsdale posted a Best Picture Oscar chart. The leading ten, he says, are (starting from the top) The Social Network, The King’s Speech, Black Swan,127 Hours, True Grit, The Kids Are All Right, Inception, Toy Story 3, The Fighter and For Colored Girls. 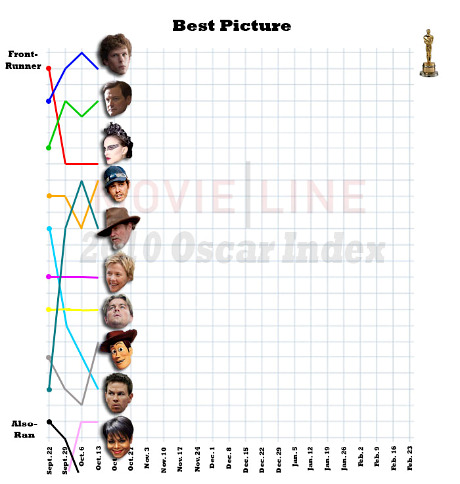 Look — I thought I explained a while back that Tyler Perry is too mediocre a filmmaker for anyone to even imagine that he might get lucky with For Colored Girls on the strength of it being based on a respected mid ’70s B’way play. He’s a niche director who’s made a lot of money, but his movies make people like me groan. The odds of For Colored Girls turning out even half-decently are not very high. People need to stop dreaming about this film.

And enough with putting FCG on these lists because Perry is the only African-American director in the pack. If FCG becomes a miracle turnaround, great. But no counting the eggs before they’re hatched, and no quotas.

Once the general community comes to its senses about Perry’s film, they need to rally around Blue Valentine. Really, truly. The Best Picture roster needs at least one super-passionate, go-for-broke love story. Plus Blue Valentine fills the slot for the too-cool-for-school John Cassevetes “little movie” category.

Other Alternates: Secretariat is too square and conservative, and it won’t be making enough money to elbow its way in. Mike Leigh‘s Another Year could easily make the grade. The Way Back hasn’t been seen by those who couldn’t afford Telluride. Made in Dagenham is a relatively decent, well-acted film about women getting the wages they deserve in a 1968 Ford auto plant, but don’t get your hopes up.