In my initial 10.20 review of Love and Other Drugs, I predicted that it would run into trouble from “the Eric Kohn-Guy Lodge nitpick crowd.” Neither of these two have run a review yet, but In Contention‘s Kris Tapley, whom Lodge writes for, gave Ed Zwick‘s film a little slapdown today, so my prediction was…well, vaguely accurate. 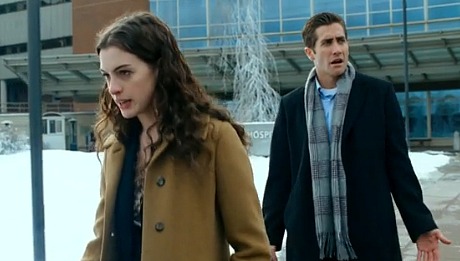 Anne Hatahway, Jake Gyllenhaal in Love and Other Drugs

I’m also claiming clairoyance by predicting the reasons that detractors like Lodge (or Tapley) would use. “Eeew, it’s two different movies…eeew, it doesn’t blend….eeew, it veers too sharply between broad comedy and disease-anguish and hot sexuality and heartfelt love and heavy emotionalism.”

Tapley puts it as follows: “There are too many ingredients in the soup, many of them tasty. But they clash in the mixture. There was an opportunity here to delicately balance comedy and drama, [but] the film never finds that balance.” If it had, Tapley writes, “it could have been this year’s Up in the Air.”

I don’t think Zwick was trying for an Up In The Air-type thing. I’m not sure he was trying to fit any of the paradigms or models that people are familiar with. I think Zwick has put together a different type of concoction that some aren’t going to “like” because it doesn’t quite follow the form they’re looking for. I only know that when a film gives off that special feeling of assurance with everything clicking, you can smell it like tasty food in a nearby kitchen.

I agree with Tapley that Josh Gad‘s fat brother character is a pain in the ass. I would have been totally fine if an assassin had picked him off with a high-powered rifle early on. And I agree that the film “run[s] through the usual high-gloss romantic comedy motions” rather than “expand thematically,” but these typical motions are handled so deftly and with such spunk and charm that I was mostly taken in.

And I’m intrigued, rather than thrown and unsettled, by how Love and Other Drugs “isn’t any one thing.” In fact, I wrote, “That’s the fascination of it. It’s not dark enough to be The Apartment, it’s not easy and it’s not ‘farce’ and it’s not just hah-hah funny, and it’s not dramedy as much as comedy with a thorny and guarded edge.”

“It just works, is all. LOAD has charm and pizazz and, okay, sometimes strained humor, and yet it never slows down or goes off the rails, or at least not to any worrisome degree. So you can be Eric Kohn and go ‘no, no…I want something else! This doesn’t fit into my comfort-blanket idea of how movies like this are supposed to work.’ And that’s fine, Eric. Go to town and send me a postcard.”

Variety‘s Justin Chang says LAOD “is rather too eager to please,” but also “super-slick, snappy, smartly packaged [and] saucy” with “an uncommon degree of sexual candor for a mainstream picture” and “ingratiating performances from Jake Gyllenhaal and Anne Hathaway.

“If one can get past the calculation inherent in the drug-pushing-boy-meets-disease-stricken-girl setup, Love & Other Drugs clicks largely because its actors do. Their ribald pillow talk lends the film a verbal tartness that’s complemented visually by the abundant nudity, though tasteful use of shadows and strategic camera placement still leave plenty to the imagination.

“That the film’s treatment of Parkinson’s disease feels as respectful as it does is a credit to Hathaway’s sensitive, understated rendering of her character’s symptoms, which appear to manifest themselves only when most convenient for the narrative.

“Crucially, the actress makes Maggie a vivacious presence, the sheer force of her spirit serving as a rebuke to her physical setbacks and countering the film’s generally insulting view of women (who fall into three basic categories here: bimbos, opportunists and Parkinson’s patients). As Jamie, the ideally cast Gyllenhaal turns on the charm full force, his energetic puppy-dog demeanor all but daring the viewer not to buy whatever he’s selling.”