Two or three days ago I was sitting at the counter of the Cosmic Diner (Eighth Ave. at 52nd Street) with my computer, and this overweight guy who looked and sounded like a reasonably bright New York City employee sat down two stools away and started telling the counter guy that his friend really loves The Town, and that he’ll definitely be seeing it soon. I flinched ever so slightly, glanced over and said nothing. I was witnessing word-of-mouth in action. This is how it happens. I felt like Margaret Mead. 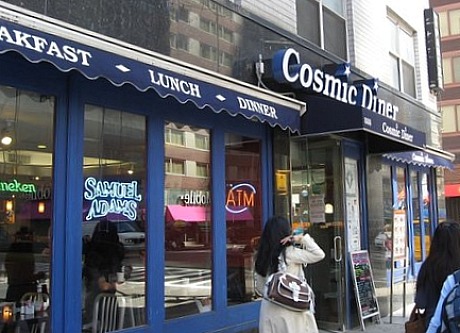 Affleck is a good director — the new Sydney Pollack! — but I kept biting my tongue and telling myself “don’t fucking say anything…just shut up. Just let ’em have their moment and shut the fuck up. If you tell them what you think — that it’s got decent action and is reasonably handled in most respects but it doesn’t begin to compete with other Boston crime flicks like The Departed, Mystic River, Affleck’s own Gone Baby Gone or The Friends of Eddie Coyle — they’ll look at you funny and weird because you’ll sound like a know-it-all.”

But after a couple of minutes I couldn’t help it.

Me: “I saw it.” Fat guy: “Yeah?” Me: “Your friend’s not wrong. It’s a good film. Good bank-robbing, good car chases. But I don’t believe in Affleck’s nice-guy bank robber. I think that’s a bullshit Hollywood conceit. And I don’t believe that Rebecca Hall‘s character…you know her?…I don’t believe that an ambitious woman, a Donna Karan-wearing bank officer, would accept an amiable, blue-collar Charlestown schlub as a boyfriend, particularly after he confesses that he’s a bank robber. If she herself was a Charlestown native, maybe. But otherwise, no way.”

What I really wanted to say was “what is it about this film that makes it so good in so many people’s eyes? It verges on bizarre. I mean, if I talk to a serious sports writer about the Yankees, I’m going to listen to what he says and give it a certain weight. I know what The Town is and I know it’s not as good as everyone is saying. It’s fine, it’s okay but calm the fuck down, will ya? It’s high-end functionalism, which is a hoity-toity term for high-end hack work. It’s basically a whaddaya whaddaya okay fine whatever. Affleck cuts his character way too much of a break. He’s basically a dirty guy who doesn’t deserve to escape. But the dictates of a big-studio crime film say otherwise.