I have issues with Made in Dagenham (Sony Classics, 11.19) and Barney’s Version (Sony Classics, 12.17), but let’s not go there now. The point is that Rosamund Pike easily gives the most arresting performance in both, and has earned full consideration for Best Supporting Actress honors as a result. Really. The evidence is abundant that 2010 is her breakout year. 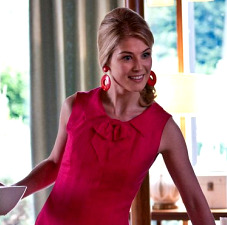 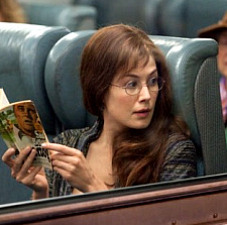 Rosamund Pike in Made in Dagenham (l.) and Barney’s Version (r.).

Pike, whose performance as Dominic Cooper‘s slightly ditzy girlfriend in Lone Scherfig‘s An Education had an undercurrent of self-deprecating wit, plays elegant, well-educated wives of character and principle in these two films.

Her role as Miriam, the infinitely gracious and grounded spouse of Paul Giamatti‘s Uriah Heep in Barney’s Version, is the larger of the two, but you could still call it supporting. She’s so true-blue in the film, so regal and refined and dependably honest, that you almost don’t believe her…and yet you do. Because Pike has a straight-shooting, no-time-for-bullshit quality about her, and this makes Miriam into something a bit more, I’m guessing, than what was probably on the page. Or maybe it was on the page and Pike was just a perfect fit.

Pike’s role in Dagenham is that of a classy but under-appreciated wife of a Ford businessman (Rupert Graves). She only has one strong scene really — a special moment with Sally Hawkins‘ Rita O’Grady, the leader of an equal-pay-for-women strike, when she confesses what her somewhat stilted and smothered life has been like. But it’s the best scene in the film. At a recent Dagenham after-party I was asked, “So what did you think of Sally Hawkins’ performance?” It’s good and honorable, I replied, but the one who really touches bottom is Rosamund Pike.

The only problem from my perspective is that neither Made in Dagenham or Barney’s Version are strong enough to easily catapult Pike into the realm of “assured contender.” Some may feel differently and that’s fine, but neither film delivers on the level of An Education, say. They just don’t. People are going to have to sit down and see these films and realize on their own that Pike is the best thing about both, and then do and say something about that. You can lead horses to water, but you can’t make them drink.