A time-pressure element has obviously been built into Paul Haggis‘s The Next Three Days, but this remake of Pour Elle is primarily about a husband (Russell Crowe) busting his wife (Elizabeth Banks), wrongly convicted of murder, out of jail. So what’s the hurry? She’s not about to be executed like Grace Kelly in Dial M for Murder. She’s in stir so what difference does it make if you bust her out this weekend or three weeks from now or whatever? 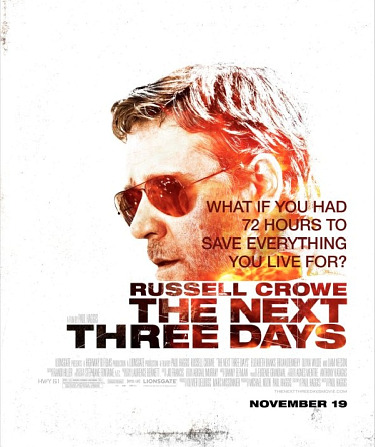 I’m saying that I smell the scent of un-grounded artificial tension built into the story if the breakout has to happen with 72 hours. Take it easy, be careful, don’t rush, knock back some brewskis, go to the football game on Sunday, etc. A jail break is not easy. My favorite was when Robert Redford and pals busted out their pal Greenberg in Peter Yates‘ The Hot Rock ; my runner-up is the organized jailbreak in John Huston ‘s The Macintosh Man, when they air-lifted Paul Newman over the wall with a crane and a net.