Lena Dunham‘s Tiny Furniture (IFC Films, 11.12) is an earnest, well-sculpted portrait of urban misery by way of self-portraiture. (Or vice versa.) Dunham, who directs, writes and stars, plays a forlorn version of herself — an overweight 20something named Aura who lives in her mom’s Tribeca loft, aspires to filmmaking but has no income and is dealing with lazy and/or indifferent attentions from a couple of guys she’s half-interested in.

Dunham’s actual mom plays her mom, her actual sister plays her sister, and her mom’s actual loft is the main setting. And there are actual actors (like Lovers of Hate‘s Alex Karpovsky) in supporting roles. And every step of the way the pacing is steady and leisurely and unforced. That’s a polite way of saying not a lot happens, and the film takes its time about it.

Tiny Furniture is realistic and character-rich and low-key “cool” as far as it goes. It’s got an honestly dreary vibe. It reminded me of what spectacular misery being young and unsuccessful and not-quite-formed can be, and how humiliating it can be to have no money, or to have so little that getting a nothing job as a hostess for $11 an hour seems like a step up.

I mean, $11 friggin’ dollars an hour from a part-time job of 25 or 30 hours a week? That’s enough money for delicatessen sandwiches and toothpaste and well drinks and a monthly subway card and various other things everyone needs but which don’t add up to very much. That’s just maintaining-but-going-nowhere-and-fuck-me money.

I was thinking at the halfway mark that Tiny Furniture is what Susan Siedelman‘s Smithereens might have been if Susan Berman‘s “Wren” character wasn’t so angry and scattered, and if she had a rich Manhattan mom.

Dunham is a fine, real-deal actress. I liked her right away, and I believed her acting to the extent that it didn’t feel like “acting.” It was just being and behavior. She has my idea of sad, caring eyes and a quick mind and a likably unassertive, quasi-hangdog manner. 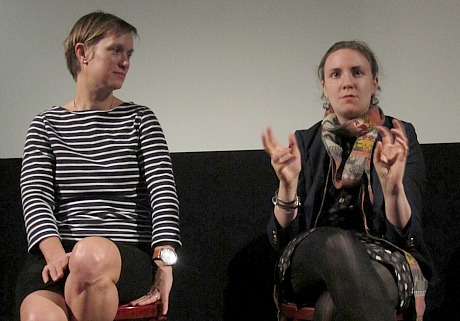 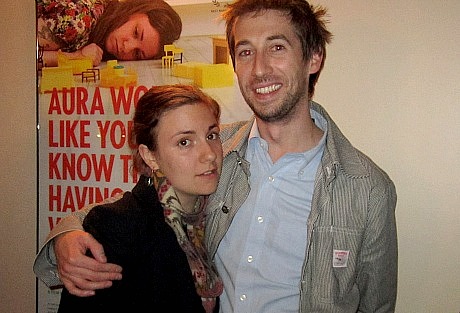 The undercurrent felt a little bit lezzy at times, but not in a pronounced way. The two guys are “nice” and interesting to talk to, but they’re both kind of into themselves and really not much of a catch. (The second guy she hangs with, a chef, is actually a bit of a dick.) And there’s this nice-looking girl with a great smile who’s obviously interested in Dunham in a romantic way who appears in a couple of scenes.

I’m just wondering why the obvious fact that Dunham’s character is bulky never seems to come up except in one scene when her best friend reads negative YouTube commentary about her shape. Is it somehow uncool to talk about this? It wouldn’t have been 20 or 30 years ago when largeness was relatively rare. Now it’s fairly common among GenY types and no one raises an eyebrow. (Dunham, whom I spoke to last night after the screening, seems to have slimmed down somewhat since filming.) But the basic social rules still apply. People with weight issues generally don’t get laid as often, and their choices aren’t as vast as those of slimmer folk. You can shilly-shally around this all you want, but being heavy is not going to make your life any easier or happier. It’s definitely a compromiser.

Tiny Furniture is a smart little low-energy thing. It has integrity, but it really could be titled A Life in Hell, I feel. I was sitting there going “this is awful, what a life, Jesus H. Christ” but at the same time I was saying “I believe this”, “this hasn’t been faked” and “Dunham knows what she’s doing.”