So why hasn’t Tilda Swinton‘s heartily-praised performance in Luca Guadagnino‘s I Am Love popped through in this year’s Best Actress conversations? For one thing I Am Love is not universally admired. It’s all lavish and cranked up in a orchestrated Visconti-ish sense. That’s what’s sublime about it, of course, but at the same time it feels like an art-film exercise in “quotes.” 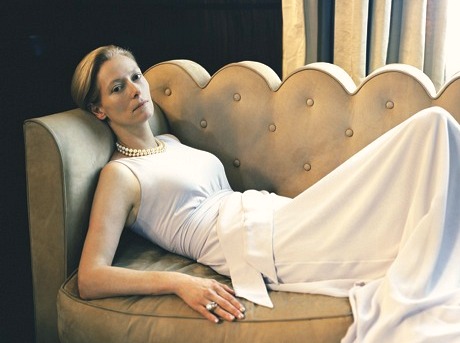 And yet the reviews Swinton got were something. “Tour de force” and all that. Consider this paragraph from New Yorker critic Anthony Lane, written as part of his I Am Love review last June:

“This is the film toward which Tilda Swinton has been tending. Put together the chill of her majesty in The Chronicles of Narnia: The Lion, the Witch, and the Wardrobe; the brunt of her motherly love in The Deep End; the leonine wildness that ate her up, in Erick Zonca‘s Julia; and the awful sense, in Michael Clayton, of a woman waiting to buckle beneath the formal demands of a working life — package all that, and you get Emma Recchi, winding the ribbon from a newly unwrapped gift around the spool of her worried fingers.”

But by Oscar season rules, it’s probably naive to think that a performance might rank as a contender for one of the Best Actress slots on mere “quality of performance” alone. And it’s pretty clear to everyone, I think, that Swinton’s Love performance just isn’t punching through. She’s not percolating. She has no heat. The last thing Tilda did that got people’s attention was that Laurel & Hardy flashmob dance number at the Edinburgh Film Festival.

In a few weeks, I’m told, Swinton will be in LA for a big round of screenings and then on to New York. Magnolia will be sending screeners to the entire Academy, SAG Nominating committee and HFPA for starters.

In an email, columnist Scott Feinberg says that Swinton “has a very real shot at a Best Actress nod. Obviously the field is very crowded, and it may be tougher to get some voters to watch a two-hour foreign-language flick that came out months ago, but I suspect that those who do will not only vote to nominate her but place her very high on their ballots.

“Keep in mind that she’s very popular among her fellow actors, who I imagine admire her fiercely independent streak on-screen and off. While her supporting performance in Michael Clayton — which was good, but far from her best — lost the SAG Award, it won the Oscar, and it’s worth considering who she beat if you want to appreciate just how well-liked/respected she is.”

Awards Daily‘s Sasha Stone says “you never know with Tilda” and that “nothing is set in stone right now.”

Cinemablend‘s Katey Rich says this reminds her of “last year’s situation with Julia, another tiny movie with a terrific Tilda Swinton performance that couldn’t get any traction. During the NYFCO vote for Best Actress there was a strong cadre of support for Swinton, but Meryl Streep wound up winning anyway. This year it feels like even fewer people have seen I Am Love, and plus the performance is a lot less baity — more restrained, more technically impressive but less gritty, desperate, that kind of flashy stuff that really gets you noticed.

“So she probably doesn’t have a chance. And with plenty of other female performances out there that need a champion — Jennifer Lawrence, Nicole Kidman, maybe even Lesley Manville — there just might not be room for Tilda.”

Swinton’s p.r. rep claims that “there are many champions for this film out there. Like Ryan Gosling in Half Nelson, Richard Jenkins in The Visitor and Melissa Leo in Frozen River, this is a performance and film that was the talk of the fest circuit at Toronto and Sundance last year, and the film did very well for a foreign film at box office. Buzz may not be crackling at the moment but it’s out there. Actors have seen the film although several key awards-season bloggers calling the race haven’t yet.”

In Contention‘s Kris Tapley says, “I still need to watch it. It’s sitting on my DVD player. I imagine it’ll be the same for Academy members all season long unless they feel a great need to give it a look.”

Coming Soon‘s Edward Douglas says he “barely got through 45 minutes of the movie.”

The Oregonian‘s Shawn Levy says he “can’t see” a Swinton headwind kicking in “but then I was an outlier on this: I believe I gave I Am Love its lowest score on Metacritic. I found it unbearable. But bully for Ms. Swinton if they can do it, I guess.”

Indiewire‘s Anne Thompson says “the only way for Tilda Swinton — who is admired by critics and art house audiences alike — to make the best actress Oscar grade this year for I Am Love is for critics to make a fuss over her in their year-end wraps and ten-best lists, and for critics groups and the Golden Globes to reward her and thus turn the screener into a must-see for SAG and Academy actors. Swinton has been nominated once (and won, for Michael Clayton).

“Metascore critics (32) gave it a 79, which is a strong score — they love Swinton’s performance. Who will the critics groups single out for best actress? Will Tilda Swinton beat out Nicole Kidman, Natalie Portman, Annette Bening, Jennifer Lawrence, Lesley Manville and Diane Lane? The problem is that someone has to mount a viable campaign for her. Magnolia has not beaten the bushes for Oscars in the past. But the movie reached an almost $5 million gross which is good in today’s market.

Rope of Silicon‘s Brad Brevet says, “I’m probably not the best one to ask when it comes to this film, as I didn’t like it in the slightest. I can understand where people are coming from when they found it sensuous and passionate, like biting into that perfectly ripe piece of fruit, but it didn’t move me in that way. In fact it moved me in the opposite direction.”

But there are plenty of admirers out there, enough so that one can say that Swinton ought to at least be in the running along with the others. Do I think she has an actual prayer as things stand? Nope. I mean, not the slightest tendril of a slender reed of hope. But maybe I’m wrong, and I wouldn’t mind at all if I was.