The Kwai Is Blu

The forthcoming Bluray of The Bridge on the River Kwai looks significantly better than a digitally projected version that I saw last weekend at Suffern’s Lafayette. (I thought it looked a bit too dark.) The Bluray Kwai seems about as perfect-looking as it could get. It’s a life-like, vibrantly colored, finely-tuned celluloid experience, and a very gratifying enhancement over the 2000 DVD.

Canon capture of scene from Sony Home Entertainment’s Bluray of The Bridge on the River Kwai, as played on my Panasonic 42-inch plasma.

Same shot rendered by the 2000 Kwai DVD, as seen on my iMac desktop

In short, the Bluray hasn’t been Spartacus-ed (i.e., turned into a digitally-reconstituted android). It looks like an exceptionally handsome 1957 film straight out of the lab. It looks and sounds absolutely perfect. It might be slightly darker and just a teeny bit browner than the DVD, and yet the jungle greens are lush and full and almost 3D radiant at times. William Holden‘s eyes have never looked so fiercely blue. And more distinctly than ever you can see bloody gashes on the top of Alec Guinness‘s head after he’s knocked over by that grenade fired by Jack Hawkins.

I have two strategic logic issues with the very last portion of Kwai that I’ve never expressed, so here goes.

1. Why do they have to blow up the bridge at the precise moment when the train’s about to cross? Who cares about the train? Wouldn’t this action guarantee that Japanese troops not killed in the blast would hunt the commandos down and almost certainly kill them? How could they expect to escape when they’re positioned so closely? It’s a hopeless suicide mission. The more sensible approach would be to blow up the bridge in the dead of night and then hightail it into the jungle while the Japanese are still waking up. Not getting killed in the aftermath of the explosion isn’t against the rules, is it? Isn’t it better to complete the mission, escape and live to fight another day? 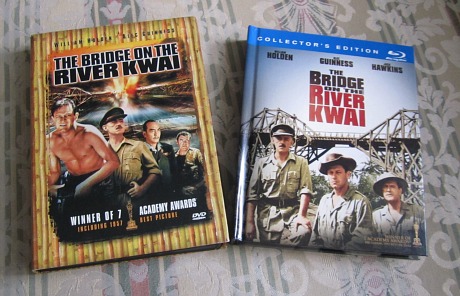