I have two minor issues with the Drew McWeeny/Darren Aronofsky/Hitfix riff that was posted last weekend. Okay, one minor one and another that I could almost call major in a fundamental/cultural sense. 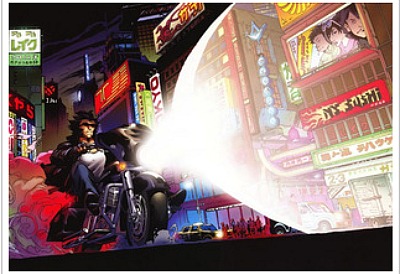 Adam Kubert illustration from 11.13 Hitfix article about a discussion between Drew McWeeny and Darren Aronofsky. Kubert “is just one of the many artists who have sent Wolverine to Japan over the years,” it says, “and now Darren Aronofsky is set to do the same.”

An illustration caption in the McWeeny article suggests that The Wolverine, which will be dp’ed by Matthew Libatique (Black Swan, The Fountain, Cowboys and Aliens), will be locationed in Japan. That scares me a bit. Go to Japan and your movie becomes a flamboyant acrobatic action-flash samurai-yakuza cartoon. I’ve loved Ichi the Killer and High and Low and dozens of Japanese-shot thrillers and action films over the decades, but visiting American filmmakers have this tendency to objectify and sanctify Japanese culture in a big-budgety, broad-stroke ways.

I’m sure there are U.S.-shot, Japan-based action thrillers that I’ve really enjoyed besides Ridley Scott‘s Black Rain and Sydney Pollack ‘s The Yakuza, but they’re not coming to mind. I know that quiet and meditation and small-scale simplicity don’t seem to factor in very much. Don’t even mention Kill Bill‘s Japanese section, which I found more or less ridiculous.

On top of which I’ve been developing this idea for years about Japan being a profoundly depressing place. Gaspar Noe‘s Enter the Void may have finally convinced me of this. Japan seems like one big Los Angeles strip mall these days. A strip mall with nicely landscaped gardens. I’m totally fine with the idea of never visiting there. I’ve never wanted to, really. Too crowded, too commercial, too expensive, and too sprawling. Plus they kill dolphins and eat them.

I also have a problem with McWeeny calling Libatique “Matty.” That feels like forced familiarity. I’m obviously not one to talk with my having adopted Bennett Miller‘s “Philly” in references to Phillip Seymour Hoffman, but Matty is somehow different. To me it’s in the same realm as Danny and Frankie.

Just so we’re straight: Mattie is bad, Danny is bad, and Frankie is bad…but Philly is somehow okay.