I’ve finally read John H. Richardson‘s Esquire interview with The Fighter costar Christian Bale, and it’s a real q & a wrestling match. Bale and Richardson argue, defy and challenge each other, shove and laugh and then argue some more. Bale hates the movie promotion-interview game, longs for a kind of invisibility, tries to switch roles and interview Richardson, etc. It reminded me of one of those New Journalism celebrity interviews that Esquire ran of the ’60s and ’70s. It’s good stuff. 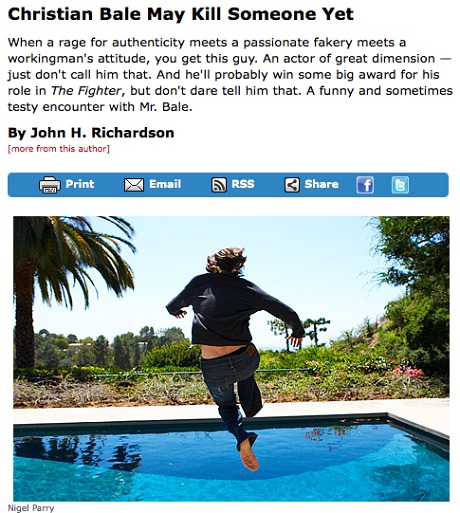 My favorite part comes when Bale confesses to not liking musicals or romantic comedies. Not even the good ones. He not only hadn’t seen Bringing Up Baby when he spoke to Richardson — he hadn’t heard of it.

Richardson: ” So what’s with all the darkness and the miserable characters and the guilt?”

Bale: “I don’t like to kinda look at any patterns in my movies. But I guess Harsh Times is kind of harsh. The New World. And the Batman movies. The Prestige. Rescue Dawn. 3:10 to Yuma. I’m Not There. Velvet Goldmine. I’m sure I’ve got some non-dark-guilt-ridden pieces.”

Richardson: “But you were this singing, dancing, happy kid. What happened to you?”

Bale: “I’m still singing and dancing and happy. I just don’t like musicals, that’s all.”

Richardson: “Or romantic comedies, I hear.”

Bale: “I just don’t find them very romantic or funny much of the time.”

Richardson: “What about Bringing Up Baby?”

Richardson: “Get the fuck outta here.”

Bale: “You’re not talking to a cinemaphile.”

Richardson: “But I bet you’ve seen Aguirre, the Wrath of God.”

Bale: “I saw The Wild Bunch recently. I remember being rocked by Naked when that came out — and I hate the pretentiousness of that, referencing a Mike Leigh movie, but it really did fascinate me for some reason.”

Bale: “And Chris Farley was just phenomenal. Beverly Hills Ninja will always remain one of my tops.”

Bale: “I have watched that movie. One time I sat down and watched it two nights in a row, and cried with laughter both times. The guy just was a phenomenon, and is missed dearly in my household.”

Here’s Bale’s best extended reply to a “who are you?” question:

“I have to admit that yeah, it’s absolutely perverse, it’s contradictory, it sounds hypocritical, I like being invisible. ‘A fucking actor? Who says he wants to be invisible? Oh yeah, good choice, mate.’ But the point is, you do get to become invisible as an actor. And I know that much of that also comes from [his pitch keens high as he breaks into a mock lament] growing up, moving around, different towns, and all that kind of stuff, and then getting attention at a very young age when you’re not ready for it and you have responsibilities, financial responsibilities, stuff which other people don’t get until much later in life.

“So you go, ‘Man, wasn’t it great before all this happened? Back when I was eight years old and I could go shoplift and nobody knew who I was and I was invisible.’ You know? And what glory days those were, and how I lost ’em too early. You know?”