Missing in Mike Fleming‘s Deadline report about Carey Mulligan landing the part of Daisy Buchanan in Baz Luhrman‘s adaptation of The Great Gatsby is any sense of what an absolute stiff the 1974 Robert Redford-Mia Farrow-Bruce Dern version was, and what may happen when Luhrman begins to wrestle with the ghost of F. Scott Fitzgerald. 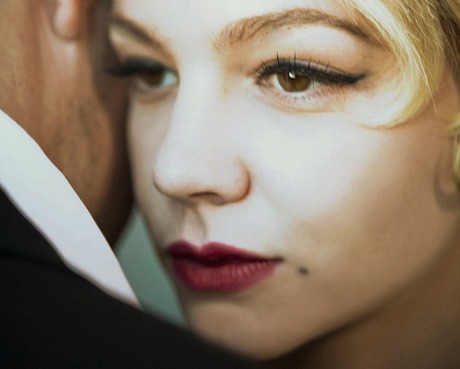 Pic of Carey Mulligan taken by Lurhman during a recent audition, and then supplied to Fleming for his exclusive announcement story.

Fleming is a shoe-leather guy who just writes it down and double-checks and types it out, but if he were so inclined he might also voice suspicion about the oil-and-water mixture of Luhrman’s hyperkinetic style and Fitzgerald’s elegiac 1925 novel.

I’m guessing that Gatsby‘s wistful tone — it’s a book about socially desperate people in states of dreamy-boozy lament — will almost certainly encourage Luhrman to turn up the intensity and the bombast even more than he did with Australia, which seemed to many like a tragedy of overstatement.

But agreeing to play Jay Gatsby (“old sport”) and also J. Edgar Hoover for Clint Eastwood, DiCaprio, no offense, has been on a roll in terms of taking the wrong roles for mystifying reasons.

In his review of the Clayton version, N.Y. Times critic Vincent Canby wrote that it “moves spaniel-like through F. Scott Fitzgerald’s text, sniffing and staring at events and objects very close up with wide, mopey eyes, seeing almost everything and comprehending practically nothing.

“The language is right, even the chunks of exposition that have sometimes been turned into dialogue. The sets and costumes and most of the performances are exceptionally good, but the movie itself is as lifeless as a body that’s been too long at the bottom of a swimming pool.”