HE reader “Webster” (i.e., the guy who recently gave an A-minus to How Do You Know and said Paul Rudd is the standout) caught a 10.26 research screening in Pasadena of Alexander Payne‘s The Descendants. And he says it “traverses that fine line between comedy and drama without a hitch. 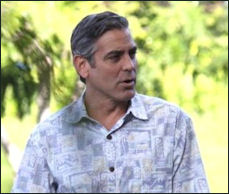 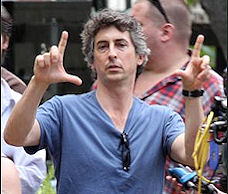 “George Clooney anchors the film as a man whose obligations to his daughters, his dying wife, his family, and even the state of Hawaii all come into play against a backdrop of infidelity, envy and greed,” he writes. “And a good ensemble cast supports him, although there’s no career-changing performance a la Thomas Haden Church in Sideways. All in all, it’s an entirely worthy addition to the Payne canon.

“Fox Searchlight obviously has its hands full with 127 Hours and Black Swan to awards season, but it clearly has a leg up on the competition with this one for 2011, along with Terrence Malick‘s The Tree of Life.”

It’s widely presumed that prior to its 5.27.11 opening, Malick’s film will premiere a couple of weeks earlier at the Cannes Film Festival. And to hear it from Deadline‘s Pete Hammond, The Descendants “may also be headed to the South of France.

“I ran into one of that film’s key players [at the Black Swan AFIFest showing] who said he had heard of ‘a Cannes plan just a couple of days ago,'” Hammond wrote. “If the Cannes berth does happen I’m told The Descendants domestic release would still be held until around this time next fall for maximum Oscar potential. In other words you can place your bets now that we’ll probably see it opening or closing the 2011 AFI Fest.”

A boilerplate Fox Searchlight/IMDB synopsis reads as follows: “Matt King (Clooney) is an indifferent husband and father of two girls forced to re-examine his past and embrace his future when his wife (presumably Judy Greer) suffers a boating accident off of Waikiki. The event leads to a rapprochement with his young daughters while Matt wrestles with a decision to sell the family’s land handed down from Hawaiian royalty and missionaries.”

The Descendants costars include Matthew Lillard, Beau Bridges, Shailene Woodley, Robert Forster and Michael Ontkean. Ontkean, best known for his roles in Slap Shot (’77) and Making Love (’82), hasn’t been in a theatrical feature of any distinction since Postcards From The Edge (’90). He’s been working on TV ever since.

Here’s an interview about The Descendants that Payne gave last summer to the Omaha World-Herald‘s Bob Fischbach.