I spoke last night with King’s Speech star Colin Firth at the post-premiere party at the Royalton hotel. Since he was chatting with director Tom Hooper, who’d recently made it clear that he’s not happy with the Weinstein Co.’s recently-unveiled King’s Speech one-sheet, I asked Firth if he more or less shares Hooper’s view. His answer was basically “I think…well, yeah.” He also enthused that there’s light up ahead and that change may be afoot. 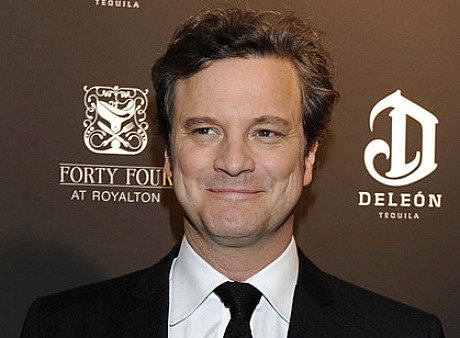 Firth’s understandable intent was to tread lightly and not bring any further grief into the lives of Weinstein Co. marketers.

The problem with the poster is that it looks poorly Photo-shopped and AFM-ish. As I put it on 11.3, “Is it that hard to create a movie poster that makes it seen as if the lead actors actually posed together in the same realm?”

I mentioned to Firth that I thought it was fairly common for senior cast members to pose together during filming for ad/pub materials. “It is and we did,” Firth replied. He and Rush and Helena Bonham-Carter together, in makeup and in costume with Firth in some sort of British Naval uniform. So a lack of group photos wasn’t an issue.

Incidentally: Watching The King’s Speech at the Zeigfeld kicked things up, by the way. It plays just as enjoyably as it did during my first viewing (which was just prior to the Toronto Film Festival), but the sound at the Zeigfeld made it seem that much better. The bassy tones and sharp highs are heavenly in that theatre. Geoffrey Rush‘s voice — sharp and precise with cave-like bottoms — felt like a symphony in and of itself. First-rate sound is half the ballgame when presenting and enjoying a film, and yet it’s rare, far too rare, for a film to sound as good as The King’s Speech did last night on West 54th Street.