I’m not saying the just-revealed True Grit one-sheet is on the level of that much-derided King’s Speech poster that appeared a couple of weeks back, but it does seem like a bit of a problem in a somewhat similar way. 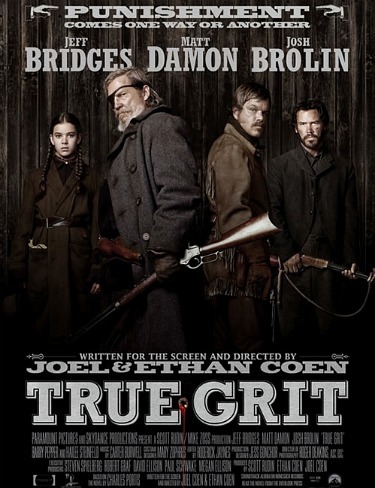 Like the fake assembly of Colin Firth, Helena Bonham Carter and Geoffrey Wright in the King’s Speech poster, the Grit job is a digital grouping of the four leads (i.e., they didn’t pose together), and the only one who looks right is Matt Damon‘s greasy-buckskin gunslinger (i.e., the Glenn Campbell role).

Halle Steinfeld seems slightly stunned and glassy-eyed and just…I don’t know, giving off a certain vagueness of purpose. She looks flat. You look at her and you go “what?” And Josh Brolin, off on the right, looks like a 9 year-old with an adult face. I know he’s supposed to look smaller due to being in the background, but he looks like a midget. (Is that a bad term to use these days? If so I meant “height challenged.”) And Jeff Bridges is just doing the ornery old bear thing. The big-bellied Crazy Heart drunk with a rifle and an eye patch. Ahm gonna sluhr mah words and all….take a little nip now and then…shoot me a buffalo or a coyote…don’t you go a triflin’!…aah got me a home in old Montecito.

The individual posters are much better. They’re fine, in fact. Just lose or re-do the group thing.