Poland Gets It Again

The critics [who’ve] pummeled Love & Other Drugs “were not really watching the movie they were being shown, but were too busy finding a way to disconnect emotionally from a surprisingly emotional film,” MCN’s David Poland has written. “It isn’t a Viagra sex comedy. It’s Love Story and Sweet November combined with a Viagra sex comedy. 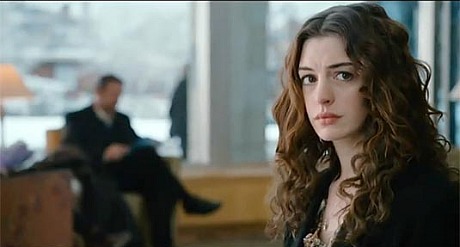 “I got a very strong feeling that [director] Ed Zwick and [producer, co-wriiter] Marshall Herskovitz were going back to the work that they didn’t quite hit out of the park in adapting David Mamet‘s Sexual Perversity in Chicago as About Last Night.

“Here, they get a lot of the raunchiness of Mamet, but in combination with a big melodramatic story that is, by its nature, very close to crossing the line into male-unwatchable mush…and they overcome the obstacles.

“And it’s not, as some would position it, just because we spend a lot of first act time with Anne Hathaway‘s naked body splayed across the screen. It’s because of very smart writing and a truly award-worthy performance by Hathaway. This kind of part has eaten up some really talented actresses over the years and Hathaway just grabs the whole thing by the balls, makes very decisive acting choices, and pulls rabbits out of her hat through the whole movie.

“I’m not saying this is a perfect film. It’s not. But it is a daring, challenging piece, and deserves to be seriously considered for all of its strengths, as well as the weaknesses. And when I look at Gurus and see that Hathaway has fallen completely off the chart, that’s a shame, because she glides through it with great assurance, no doubt supported by a strong director who helped her push and keep those boundaries.

From my 10.30 review: “It’s not Alexander the Great. It just works, is all. LOAD has charm and pizazz and, okay, sometimes strained humor, and yet it never slows down or goes off the rails, or at least not to any worrisome degree.

“Certain people might get pissy about it. A guy I talked to in the men’s room after the screening was going “eeew, it’s two different movies…eeew, it doesn’t blend…eeew, it veers too sharply between broad comedy and disease-anguish and hot sexuality and heartfelt love and heavy emotionalism.

“LAOD isn’t any one thing, and that’s the fascination of it. It’s not dark enough to be The Apartment, it’s not easy and it’s not ‘farce’ and it’s not just hah-hah funny, and it’s not dramedy as much as comedy with a thorny and guarded edge. The tone is farcical one minute, dry and glib the next, and then it devolves into Josh Gad-Jonah Hill-level humor, but thankfully not too often or for too long. And then it turns melancholy.”