In a comment thread for yesterday’s “Strange Pundits” story, HE reader PastePotPete wrote that he’d recently seen Darren Aronofsky‘s Black Swan (Fox Searchlight, 12.3) and that people generally seemed to find it “astonishing.” And yet despite that reaction “there were a lot of women [in the audience] who seemed to despise the movie. And I didn’t talk to or overhear a single male audience member disparaging it. 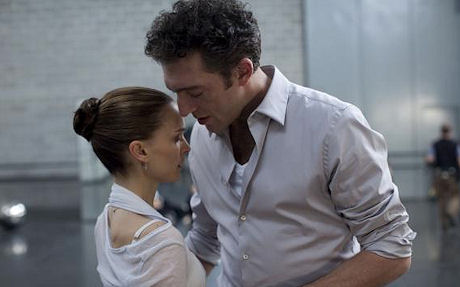 “I think this disparity, which I believe Sasha Stone has brought up on the Oscar Poker podcast, will prevent it from garnering the awards it deserves, aside from Portman’s in-the-bag Best Actress award.”

So I wrote him write back and asked, “Did any of these women explain their feelings?

“My impression since the Venice Film Festival is that some women don’t like Black Swan (and this seems like a very weird reason to slam a film) because Portman’s character is too weak and distraught. Because she’s besieged by feelings of insecurity, anxiety and panic. And because some women resent the fact that she’s allowed herself to become torn and frayed, and is finally undone by her demons.

“Are we to presume that women viewers consider the character of Portman’s performance dishonestly conjured because…what, there are no such women in the performing world? Female artists who are worried about whether they’re good enough or not, about whether they might be replaced, or whether they’ve got enough talent or ambition to really make it? I don’t want to go out on a limb, but I believe there are many male artists out there with the same hang-ups and concerns.

“The implication is that some women don’t like this film because Portman’s self-destructive character isn’t positive enough — that she’s not an upstanding role model and that it’s not good for female characters of this type (or performances about same) to be admired too much or put on a pedestal. Is it me, or is that the single lamest rationale for disliking a film ever put forward in Hollywood history, or at least since the days of Stalinist Russia?

“By the same token did women of 1965 declare that Catherine Deneueve‘s character in Repulsion was also a negative role model, and therefore shouldn’t be admired too highly?”