This q & a between Deadline‘s Mike Fleming and The Fighter‘s producer-star Mark Wahlberg went up Wednesday night…right by me. I didn’t read it Thursday because I wanted to see the film first, and of course I went that night. Yesterday it took me all day to tap out my Fighter review. This morning I finally paid attention, and I’m glad I did because now it all fits together.

Deadline‘s Mike Fleming: “When you first sign on, Darren Aronofsky is directing you and Matt Damon. Then Matt steps out but no problem, you’ve got Brad Pitt negotiating. Then Aronofsky leaves to make The Wrestler, and Pitt leaves to make Inglorious Basterds. And you’re left behind. When did you most fear that this movie wasn’t going to happen?”

The Fighter‘s Mark Wahlberg: “I really couldn’t look at it like that. I’d already told Micky Ward that we were going to get it done, and I was getting three or four phone calls a week from him. I knew it meant everything to him, and to Dickie Eklund, to have their story told. This movie had to get made. So I had to figure [it] out.

“At Paramount, they had a certain idea of how they wanted the movie to be made, the filmmaker, the costar and the budget. We went down the road with a couple other people and it didn’t work out. I went to the studio and said, I think I can figure out a way to get this movie done. Can you let me take for a little while, and then bring it back to you? They entrusted me with that. I thought I had figured out a way to make the best possible version of this movie and I was able to go and get that done.

Fleming: “Was this the most adversity you’d experienced in getting a movie to happen?

Wahlberg: “By far. I’ve never had anything like this. I hope I never have to go through anything like this again, even though the results were extremely positive. It was nerve wracking, physically and mentally exhausting, right down to the final hours. But that’s symbolic of who Micky was, the guy who never gave up, who never quit. Playing him, I literally got into that head space. I’m like that anyway. I’d never be in the position I’m in if my attitude had been, if it happens, great and if it doesn’t, okay. I’m not one of those guys where they just opened the gate and said, come in and do whatever you want.” 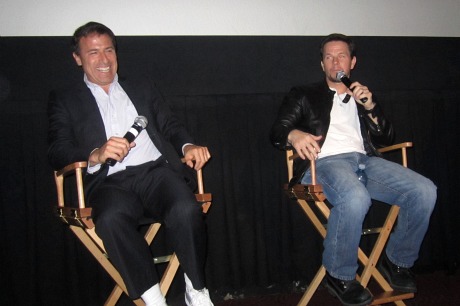 Fleming: “The Fighter went from a $50 million Paramount picture to an independent that cost around $20 million, even though it’s still distributed by Paramount. I’ve heard you gambled most of your salary on the upside. When you work hard to establish a quote, what goes through your mind when you consider taking a big cut to get a picture made?”

Wahlberg: “This wasn’t hard at all. If you make those kinds of sacrifices for a good movie, all that other stuff will continue to be there for you. I’m more nervous about taking a big salary on a big-budget movie where, if it doesn’t succeed, you’re in big trouble because you take all that weight for its failure. I believed in this movie, that it was an amazing story that could inspire people. I thought those guys were so heroic. And I’d given my word and I didn’t want to be that guy who said, hey, we’re doing something, and then not.

“But I’ll tell you, I’ve learned not to count my chickens before they hatch. You have no idea. This movie was pretty much a go, back at the beginning. So I’m at a junket and when they ask what’s next, I say I’m going to do The Fighter with so and so. Then, you’re promoting the next movie and the question is, so when are you doing The Fighter? And you’re just like, oh, no. You say, we didn’t do it yet, but we’re going to get it done. And then it became this ongoing joke. Every time I promoted a movie, I’d see someone else I’d talked to the movie about with such enthusiasm. Now, I don’t like to talk about things until I’m on the set.”

Fleming: “When your picture is on the ropes, almost knocked out, how symbolically important was it for you to keep training? Would it have been conceding defeat?

Wahlberg: “Yes, for sure. And from a practical standpoint, if you work out for two years and then you don’t do it again for six months, you’re back to square one. It’s not like riding a bike, where you get right back on it. That training process was as expensive as it was time consuming. It wasn’t like somebody else was footing the bill. I was dragging these guys around with me, everywhere we went, putting them up in apartments when I was in different cities, on different locations, making films and promoting films. There were times we were so desperate to make the movie that we almost made the wrong version of the movie.

“For whatever reason, we were protected. I was able to get David O Russell. After spending a lot of time with David, I just thought he could make a version of this movie we hadn’t been looking to make before. It would still be very real, but it would have more heart, humor and emotion.”