They Aren't The Game

Hollywood Elsewhere believes in the Toronto Film Festival-to-Oscar night cycle as much as anyone else, and probably more than most. But let’s reiterate once again, as I do every year at this time, that while Oscar night is the climax — the event that delivers the stamp of history — it mainly feels like an anti-climax, or has felt that way, it has seemed, to more and more readers because the final preferences of the slow-to-awaken Academy parochials are not (and never will be) the stuff that shakes the rafters. 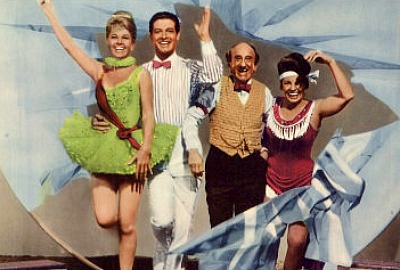 The Oscars only ignite when a big shocker happens — Crash beating Brokeback Mountain, The Pianist taking the Oscar for Best Director and Best Updated Screenplay and nearly(?) toppling Chicago — or when history is made like The Hurt Locker‘s Kathryn Bigelow becoming the first woman to take the Best Director Oscar. Otherwise they mainly confirm what we’ve all been kicking around for months and have all known was coming, etc.

You want interesting? Exciting? It’s us. We’re it. Our daily advocating-and-arguing entanglement and the unruly storms that follow. Filmmakers and distributors and the general community of film lovers repped on this site, I mean, and others like it. People who care much, much more about movies, and for far more interesting and compelling reasons, than the lazy-ass Academy default-thinkers.

The Academy and the Oscars comprise the Big Classic Narrative…fine. And it’s obviously what drives the award-season economy and thank God for that, but we’re the show. Hell, we’re the payoff. Right now, here, tomorrow, next week, last month in Toronto and Telluride and Venice and what may or may not have happened last night during the AFI Fest showing of The Fighter .

The best thing about awards season — the thing that really and truly matters — is the debate and the rancor and (apologies for alluding to a certain 1957 Stanley Kramer film) the pride and the passion. For Don Logan it was “the bolt and the buzz…the sheer fuck-all of it,” and for people like me (and presumably the bulk of HE’s readership) it’s the movies and the conversation and the wrestling, even, about cinematic and cultural and political values that delivers the excitement and the “meaning” and the memories.

It’s the daily “this is what moves me” and therefore “this is who I am or who we might be or could be” that floats the boat. These are the days of judgment and celebration, and it doesn’t get any better than right now, this moment, the digital travelling roadshow that thousands (or tens of thousands) of us are pushing along in different ways.

The serious multitudes and the Really Big Money kick in when the critics groups and the nominations and finally the Oscar show itself occur — I obviously get that — and yet a little part of me groaned slightly when I read Sasha Stone‘s state of the race piece this morning. She’s my Oscar Poker partner and I love her, but she’s so spelled by Academy mythology you want to tap her on the shoulder or more appropriately give her a hug and say, “Sasha…it’s not about an ABC telecast next February, or those extremely nice and likable sheep who vote. It’s about you and me and all of us. We love the Oscars and the dough but let’s not forget what matters. We matter. We’re it. We’re the jugglers and acrobats and trapeze artists and lion-tamers. We are Jumbo.”

Or, to further belabor the point, the foreplay and the build-up are where the real fun is. The Oscars are the rote orgasm. I’m more of a Kama Sutra man myself.

November 10, 2010by Jeffrey Wells5 Comments
« Previous post
And The Fighter Is…
Next post »
"A Dash of Audreyness"