Two more reports about Peter Weir‘s The Way Back. One concerning yesterday’s press screening at L.A.’s Raleigh Studios, and the other about the strategy to not open in New York this year and therefore to not screen it for the New York Film Critics Circle. 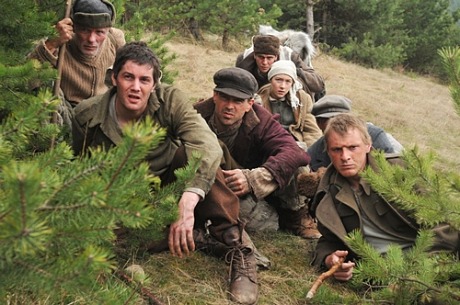 The decision to book the shoebox-sized Fairbanks room for yesterday’s first official L.A. press screening was due to a request by a certain unnamed journalist that the screening was primarily held for. Because he/she lives closer to Raleigh Studios than other screening rooms (or so I understand), this journalist actually said “I want to see this large-scope, David Lean-like outdoor epic inside a dinky little theatre with crummy sound…that, believe it or not, is my request.”

Newmarket’s decision to not open The Way Back in Manhattan before 12.31 (and therefore not show it to the NYFCC membership) is due to a risk vs. cost equation. While the chance of winning a NYFCC award (Best Picture, Best Director) is certainly possible (i.e., it’s said by everyone to be a very strong film), the high costs involved in a New York City opening in December have persuaded Newmarket that perhaps sufficient payback won’t manifest. Who knows? But the film will be viewable and voted upon by the Los Angeles Film Critics Association, the Broadcast Film Critics Association, and the National Society of Film Critics, I’m told.