The Film Forum is using a Village Voice blurb to promote its 30th anniversary engagement of Martin Scorsese‘s Raging Bull. It urges viewers to “catch all the bloody, bone-crunching action as it was meant to be seen.” But not heard, I would say. Raging Bull has never sounded all that great in movie theatres, certainly not to me. And the Film Forum almost never delivers full-bodied sound (it’s always a little bit soft) so why see it there? Why go through the potential frustration? 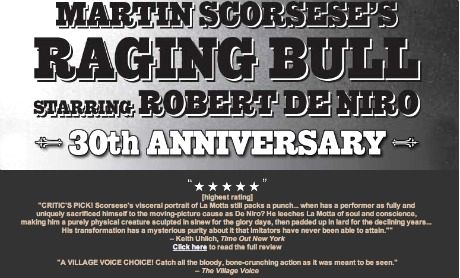 Raging Bull has a few dialogue scenes that sound so faint (or have always sounded so faint in the theatrical showings I’ve attended) that you have to cup your ears at times. So why risk it when there’s the option of the Raging Bull Bluray and/or the 2005 DVD, both of which actually allow you to hear each and every line of dialogue?

The first two times I saw Raging Bull was at the all-media press showing at Manhattan’s Beekman, and then at the good old Sutton on 57th Street for a plain public showing. That was almost 30 years ago, and the sound levels, trust me, were atrocious. It was like trying to watch a 16mm Jonas Mekas film at the Collective for Living Cinema with earmuffs on. Especially some of the dialogue scenes featuring Joe Pesci and Cathy Moriarity. The scene when Robert De Niro first talks to Moriarty on that Bronx street next to the public swimming pool was especially irritating. But no longer. Home-theatre technology has saved the day.