The vast majority of reports about the Beatles arrival on iTunes, which was announced this morning, have offered no explanations about what’s been holding this deal up for so many years. However, an article posted last night by the Wall Street Journal‘s Ethan Smith (with additional reporting from Nick Wingfield and Dana Cimilluca) provides a through-sounding history. 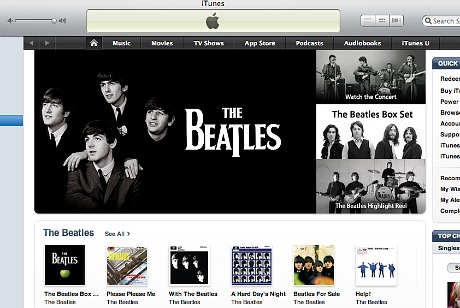 Pop-out #1: “People who have done business with [the Beatles] and its corporate entity, Apple Corps Ltd., describe a very slow-moving process in which the two surviving members, and the heirs of the other two, can take a long time to reach consensus.”

Pop-out #2: “The Beatles deal with iTunes was delayed in part by ongoing trademark litigation, the most recent round of which was resolved in 2007. The Beatles and iTunes have traded lawsuits since 1978, when the Beatles alleged that the computer maker, incorporated as Apple Computer in 1977, infringed on the band’s trademark in the name and logo of Apple Corps. The lawsuit was settled in 1981 for an undisclosed sum, plus an agreement that the Cupertino, Calif., computer maker wouldn’t compete in the music business.”

Pop-out #3: “The Beatles’ record label, EMI Group Ltd., has been under financial strain following an ill-timed leveraged buyout by Terra Firma Capital Partners LP in 2007. If the iTunes tie-up generates significant cash advances or sales, it could delay breaches in the company’s loan covenants. Terra Firma borrowed ¬£2.74 billion (US $4.4 billion) from Citigroup Inc. to finance the deal, but has fallen into breach of those covenants, forcing it to add millions more to its equity position last year.

Pop-out #4: “Even as recorded-music sales have plummeted, the Beatles have remained one of the most reliable franchises in the business. In 2009, 39 years after breaking up, they sold the third-highest number of albums of any act in the U.S., according to Nielsen SoundScan, with 3.3 million copies sold.”