Support on Patreon Follow @wellshwood
28 Comments
Do The Mess-Around

I can’t see clear to buying the Bluray, but the ornery rascal in me would like to argue that the Hathaway isn’t half bad and that the Coen’s version is somewhat better, okay, but not that much. I don’t know if I could make this stick — we’re talking Henry effin’ Hathaway, after all, and I’d also have Glenn Campbell as “LaBeef” to contend with — but I’d like to give it a shot, just for fun.

And for all of it, Rabbit Hole doesn’t seem to be connecting all that strongly with ticket buyers. Or not so far, at least. It’s only playing in five theatres (or was the last time I looked), but it had only earned just under $75 thousand after six days (12.17 through 12.22) with a per-screen average of $10,756. “The debut weekend was very disconcerting,” says boxofice.com’s Phil Contrino. “Most of the major Oscar contenders have had no problem tallying a location average of more than 50K.” Obviously there’s some kind of hesitation out there.

I’m guessing that people are considering the title (which alludes to darkness and hiding away) and asking themselves if they really want to see some kind of bummer over the Christmas holidays. That’s not what Rabbit Hole is, at all, but you know how people think and how most of them refuse to read reviews, etc. They just watch the trailers and go with gut impressions. Mix this in with general perceptions about Nicole Kidman (i.e., people don’t like her that much, think she’s cold and unrelatable), and you’ve got some kind of situation, or at least the appearance of one.

The overall picture would brighten considerably if and when Rabbit Hole is nominated for Best Picture, which it fully deserves to be. The critcally hailed Lionsgate release is expanding this week with another break set for 1.14.11, so let’s see what happens.

Yesterday I quoted ESPN’s Bill Simmons about The Fighter, but in the comment thread HE reader crazynine was especially taken with Simmons’ assessment of what’s happening with the movie audience these days and how they like to watch films, and how this is demanding a sea change in exhibition strategy.

It turned out that producer Cotty Chubb (among many others) has been kicking around the same notions as Simmons, or at least ones that are fairly similar. Day and date, day and date, day and date. Yesterday Indiewire‘s Anne Thompson posted an open letter/suggestion Chubb has made to Relativity’s Ryan Kavanaugh.

Simmons: “The movie industry is battling the same issue as every professional sports league: How do you keep dragging consumers to your theater/stadium when (a) the home experience keeps improving (better televisions, surround sound, Blu-rays, season packages, the internet), and (b) because we’ve become a nation of multi-taskers, some people don’t want to spend two or three hours sitting in the same seat focusing on one thing?

“As recently as 15 years ago, you wanted to see every decent-to-good movie in the theater just like you wanted to see the best players and games in person. There was real urgency. [The optn was] either I see this on the big screen right now, or I wait a year and rent the VHS to watch on my crappy TV. But the necessity of seeing a movie in 2010 hinges on three things beyond ‘can I see this on a date?’

“(1) Am I getting something with Movie X’s cinema experience that can’t be replicated at home? (Think Avatar or, more recently, Tron.)

“(2) Has Movie X gained enough social momentum and critical buzz that I’ll feel left out of casual conversations if I haven’t seen it? (The Social Network)

“(3) Can I wait until Movie X comes out on Netflix, Blu-ray or cable and just watch it at home with my family? (Wall Street 2)

“Question No. 3 frightens the bejeezus out of Hollywood. Even if die-hard movie junkies will always keep hitting the theater, how do you keep everyone else coming?

“The short-term strategy: Dumb things down and snare moviegoers in the simplest of ways (making them laugh, scaring them, thrilling them, freaking them out with 3-D or blowing them away with a nine-figure CGI budget), or roll up your sleeves and create quality films that force people to come see them. The long-term strategy: A radical pay-per-view system that covers them both ways.

“If moviegoing habits are shifting toward living rooms (and it seems as if they are), why shouldn’t studios profit as much as they can? Within three years, I bet we’ll be able to watch new theatrical releases on pay-per-view for something like $44.95 — much as we would rent UFC events or boxing matches now — which really isn’t that bad of a deal, especially when two people spend $50 on a movie anyway (between tickets, parking, food and drink), and especially when parents have to waste a date night on a movie (which means a babysitter, dinner and a three-figure night by the time it’s over).”

Chubb: “For an original movie to succeed [thse days], it has to be ubiquitous in the culture; readily available however, whenever and wherever its audience wants it; priced right for the experience; and with a community-building capacity built into its presentation.

“Here’s what Kavanaugh needs to say [to the big exhibition honchos]:

“I’m Ryan Kavanaugh and I want to fill your theaters with young people eighteen to twenty-five, people who’ve slowed or stopped their movie consumption, people who will buy your popcorn and hot dogs and sugary drinks (and they’d buy expensive beer if you’d sell it to them and expensive pot if the government had any sense). I want your theaters to be full of happy people.

“Relativity bought Rogue Pictures from Universal to make movies for those audiences, young movies, smart movies, crazy movies, exciting movies, and I want people to see them. They won’t be costly big blow-things-up CGI spectaculars. Rogue can’t and won’t compete in price with those. So I don’t want to charge my audience the same as for those big spectaculars.

“Here’s my deal. If I’ve got a picture that’s going out on three or four hundred screens, I’ll let you have the movies almost for free. Give me a buck or two for every ticket you sell. You set the price for the ticket-buyer in your theaters so that you bring in the most people and sell the most stuff to them. That’s all your money and you keep it all. Price it the way that makes sense in each theater, in each market for each show. I don’t care about that so long as I get my buck or two.

“But I get to put the picture out day and date any way I want: VOD, disc, streaming, download to own, whatever the buyer wants.

“You get a growing theatrical audience and almost all the revenue from it. I get to concentrate my marketing dollars on opening the movie on all platforms at the same time, and thereby achieving ubiquity at a substantial savings. We both get to price right for the audience and the specific experience. And with right pricing and immediate all-platform access, we can build community and buzz and want-to-see.

“Some will want to experience the movie in the theater. Great! Make that experience the most fun possible. Stop the noisy pre-show bullshit. Nobody wants to pay money to see a movie and be subjected to those lame ads. They want to talk to their dates and talk to each other and then see the trailers and then shut up and see the movie on a beautiful big screen with great sound. The more exciting and fun it is for the right price, the more people will come to your theaters.

“Some will want to watch it at home, on a computer screen in the privacy of their own room or on the living room screen hanging out with friends. Why should we care where they watch it, so long as we’re both making money?

I was eleven or twelve when I jettisoned the idea that I’d have to pay for my sins in the afterlife. But every time I watch Bryan Desmond Hurst‘s A Christmas Carol, and particularly Michael Hordern‘s big Act One scene as Jacob Marley’s ghost, the concept of suffering in death for one’s lack of kindness, charity and compassion in life, childish as it seems, is revived. Hordern’s performance half-scares and half-transforms, if only for the moment. 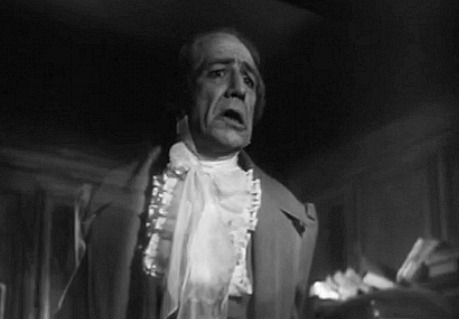 Hordern was 40 or thereabouts when he played Marley. He passed in 1995 at the age of 84. Among people like myself he’s best known for his performances in El Cid (“Rodrigo knows what he must do”), The Spy Who Came In From The Cold (“That’s not quite fair”), How I Won The War (“beware the wily pathan”) and Juggernaut.

I don’t want to think about the length and weight of chain those Republican Senators who tried to block the 9/11 First Responders bill are carrying around right now. 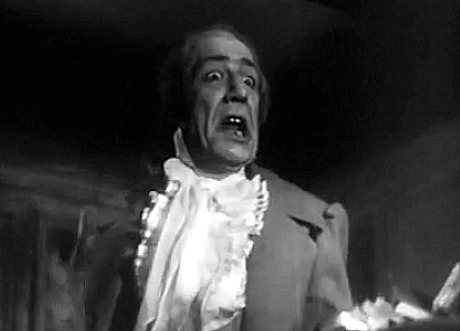 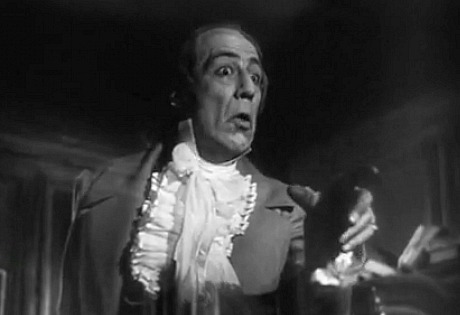 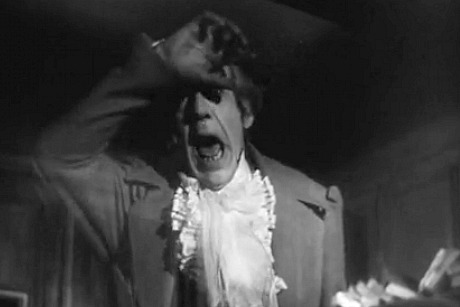 VCI Entertainment’s Bluray of Bryan Desmond Hurst’s A Christmas Carol (’51) came out thirteen and a half months ago. I bought it, of course, but I missed the big reveal with the little guy in the mirror (i.e., to the left of Alistair Sim). Now that I’ve seen it I’ll never not notice it. It’s like the kid extra in North by Northwest who plugs his ears before Eva Marie Saint shoots Cary Grant in that Mt. Rushmore cafeteria.

In tribute to the about-to-commence Christmas holiday, which I dread with every fibre of my being because of the silence and calories and carol-singing and football games and endless TV-watching it brings, I’d like to dispute the notion that people don’t go online during the holidays because they’re otherwise engaged with family and partying and watching football games.

Not in my experience. People are always online with their handhelds, iPads and laptops…always. Okay, traffic does drop somewhat during Xmas week, although I can’t imagine why. No under-50 person focuses on a single diversion or distraction these days — it’s always two or three at the same time (i.e., conversation plus TV show plus texts plus surfing). On top of which most people are dying for little time-outs from their families and relatives after 36 to 48 hours of alcoholic yaw-haw.