Sunday Update: Coming Soon‘s Ed Douglas is reporting that Little Fockers has “made $34 million just over the weekend, $48 million in five days. It’s going to do over $100 million easy and probably around $130 to $140 million total, if not more. Just because people didn’t rush out to see it didn’t mean they didn’t want to see it. Sure, it’s a failure compared to Meet the Fockers but they were lucky to get another movie out of the franchise. Hopefully they’ll end it there and not embarass themselves further.”

Yesterday I wrote an assessment based on Friday’s earnings that was incorrect. I made a mistake due to haste, a lack of sufficient research about Christmas Eve tendencies and previous Focker film incomes, and (I admit) a personal longing or dream that Fockers‘ initial earnings might be reflected throughout the weekend. Wrong. The Wrap‘s Daniel Frankel has reported that Little Fockers “undershot tracking by more than $10 million, with pre-release expectations coming in at around $60 million.” Nonetheless, it’s fair to say that a terrible film has opened fairly well.

An L.A. Times report says that “three people close to the film said [Little Fockers‘] budget was between $130 million and $140 million, though a spokeswoman for domestic distributor Universal said the final cost was about $100 million.”

Swan swag received from Fox Searchlight two or three days ago. The classic moderne style works. It’s like a Weimer-era German poster from the early 1930s. 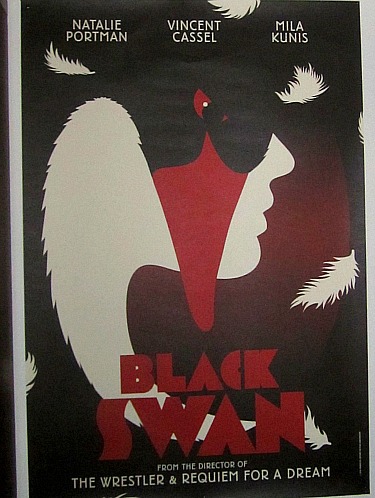 The Hangover in Iowa…terrific. If anything can save this one, it’s the wit and aplomb and savoir faire of Ed Helms.

33 Comments
Keep Your Hopes Down

Have we moved beyond “dump” months (February, March, August) and into the concept of a dump year — i.e., 2011? If you think things are going to be bad in Washington with the Republican House majority, wait until you endure next year’s mainstream films. I’m talking about what looks to be the biggest mudslide of Eloi fast-food movies in human history — cheap/shallow/rancid concepts taken to the corporate limit, formula eye-dazzle, superhero comic-book/ComicCon crap. Just scan any list. It’s devastating. Shoot me now.

I realize that things always seem grim at the start of any annum, but apart from a list of fifteen 2011 films — Alexander Payne‘s The Descendants, Terrence Malick‘s The Tree of Life, Cameron Crowe‘s We Bought A Zoo, Zhang Yimou‘s Nanjing Heroes, Steven Soderbergh‘s Contagion and Haywire, Bennett Miller‘s Moneyball, Stephen Daldry‘s Extremely Loud and Incredibly Close, Rod Lurie‘s Straw Dogs, Jodie Foster‘s The Beaver, George Nolfi‘s The Adjustment Bureau, David Fincher‘s The Girl With The Dragon Tattoo, Steven Spielberg‘s The War Horse, Martin Scorsese‘s Hugo Cabret, Francis Lawrence‘s Water for Elephants and Jason Eisener‘s Hobo With A Shotgun — what do people like me have to look forward to?

I know, I know. There are always four or five major Sundance breakouts, and another four or five each from Cannes and Toronto. I’m sure I’m missing or overlooking at least 15 or 20 possibilities. I’d feel a lot better if there was at least half a chance of Noah Baumbach‘s While We’re Young opening by year’s end, but it’s not expected to start shooting before early summer so I guess not.

I don’t care what anyone says about Jon Favreau‘s Cowboys & Aliens. It’s obviously just another bottom-feeding bullshit genre movie with laughs and CG and six-shooters and Daniel Craig, Harrison Ford, Olivia Wilde, etc. Strictly ComicCon. A half-comic Jonah Hex with flash. Stop dreaming. You know what it’s going to be.

Wait…we’re going to have to wait until 2012 for Jerry Bruckheimer and Gore Verbinski‘s The Lone Ranger?