Where would The King’s Speech be in the Best Picture race, impressionistically-speaking, without Entertainment Weekly‘s Dave Karger? The entire King’s Speech bandwagon, face it, is more or less depending on Karger’s allegiance. Okay, he’s not the only fellow with his finger in the dyke, but in the wake of Karger’s recent toe-to-toe with Awards Daily‘s Sasha Stone it sure seems that way. Karger holds firm, mans up, refuses to turn tail, etc. 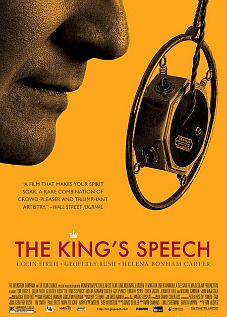 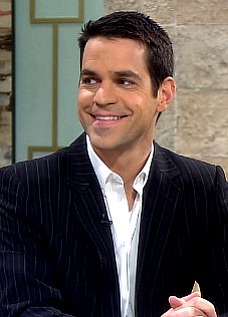 It’s no secret that Oscar handicappers have been downgrading the chances of Danny Boyle‘s 127 Hours to earn a Best Picture nomination, largely due to some Academy members refusing to watch the screener due to arm-carving concerns. I believe that if Fox Searchlight had distributed these James Franco holiday gingerbread cookies to press and Academy members, it might have lessened anxiety levels. Seriously. (Thanks to Bill McCuddy for the photo.) 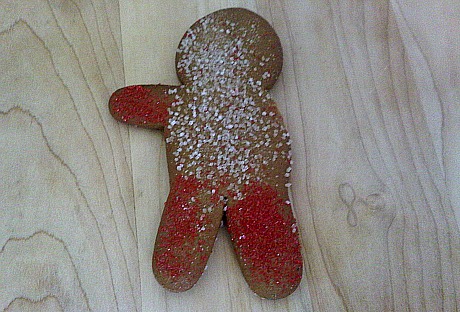 Alonso Duralde‘s 12.28 Movieline piece says that Anton Corbijn‘s The American was “mismarketed.” That implies error when this was a simple case of Focus Features misrepresenting The American to earn decent coin before the word got out that it’s an austere art-house film with almost no action. They lied and made $16,662,333 the first five days. If they’d told the truth they would have made a lot less. Simple.

Earlier today OK magazine critic Phil Villarreal thanked a Pheonix-based film publicist, Barclay Communications’ Lindsay Derr, for an invitation to see a 1.25 screening of The Mechanic (CBS Films 1.28), the latest action thriller starring Jason Statham. The invitation, however, says that reviews must be held “until opening day.” Villarreal felt this was unfair.

His objection was due to the fact that Arizona Republic critic Bill Goodykoontz, a top Gannett critic whose reviews appear in papers around the country, always reviews Friday openers on Wednesday. “If I go to the screening I will post my review Wednesday, 1.26, because that’s when Goodykoontz will post his review,” Villerreal replied, “[because] I will not respect an embargo that’s different for different people. If this isn’t okay let me know and I will not attend the screening.”

Derr’s response: “That is not okay so I will have to ask that you not attend the screening.”

Villarreal is a member of the Phoenix Film Critics Society and has joined the Online Film Critics Society. He says he’s determined that he will post his reviews “once Goodykoontz has posted his, since he is the biggest dog in my corner of the country. That policy seems to be okay with Allied [another Arizona-based publicity outfit] for the time being, but it’s apparently not good enough for Barclay.”

Worden was talking about driving a huge cattle herd to market across rugged country,

I can’t think of a recent “too happy” film that qualifies, but the reason for Biutful‘s 71% Rotten Tomatoes rating, it seems clear, is that a certain percentage of critics are saying, “It’s obviously very well made and Javier Bardem is great, but it’s just too gloomy, dammit, and I won’t have that…I want a few more rays of sunshine in my dramas, thank you.”

What they’re saying, in effect, is one of two things about their own life experience. Either they don’t believe that bad luck comes in streaks for some people, particularly those who lack sufficient funds or cushions, or they know that this happens but they just don’t want to go there. I’m a big fan of Biutiful but even I feel that the downish stuff is a bit much toward the end, but I know things can get that way (i.e., I’ve tasted bad runs in my own past) so I went with it.

Nearly eight months ago I wrote about Paramount Home Video’s failure to even state an intention to put out a Shane Bluray. George Stevens‘ 1953 classic is one of the jewels in the Paramount crown, and they’re reluctant to Bluray it, I’m told, because it’ll cost too much to upgrade the materials, etc. How admirable.

A Shane Buray nonetheless sits at the top of my 2011 wish list, however unlikely this may be. Second-ranked is a Bluray of Fred Zinneman‘s From Here to Eternity, which was remastered by Sony’s Grover Crisp in late ’09 (and shown in Cannes last May) in preparation for a Sony Home Video Bluray…which has been on the back burner ever since. Third and fourth are Ben-Hur and Barry Lyndon Blurays from Warner Home Video, which I understand are definitely in the pipeline.

Divorced from reality as this may sound, I’d also love to see a Bluray of The Bridges at Toko-Ri (’54) because of Loyal Griggs‘ exquisite, extra-ripe color photography.

Two years ago I wished for Paramount Home Video Blurays of To Catch A Thief and The Ten Commandments (both shot in VistaVision) and one of George Pal’s War of the Worlds (’53). And I’m still craving a Bluray of Marlon Brando‘s One-Eyed Jacks (also in VistaVision, obviously requiring a restoration and a strategy that will remove it from public domain). Paramount’s absentee landlord reputation, of course, makes this unlikely.

My other 2011 Bluray hopes/expectations: Sweet Smell of Success, The Empire Strikes Back, The Birds, Taxi Driver, Chinatown, Citizen Kane, Lolita, Blow Up, Red River, Pulp Fiction. It’s been reported over and over that Lawrence of Arabia won’t come out until 2012. Here’s an Amazon wish list.

Short of fart gags, the “humor” in this trailer for Paul seems as low and crude as a film like this can possibly get. The bird-eating at the end is the only moderately amusing bit in the whole thing. What an apparent comedown for Greg Mottola (Superbad, Adventureland), once a cool indie-minded director and now the manager of a dog pound, leading movie culture down the ladder toward an across-the-board mongrelization of comedy.

I’ll always admire Donald Spoto, particularly because of “The Dark Side of Genius,” his 1983 Alfred Hitchcock biography. But I resolved to stop buying after reading “High Society: The Life of Grace Kelly,” which told me that Spoto had become an ally and protector of his subjects’ reputations. Now it’s being claimed that his Joan Crawford biography, called “Possessed,” continues in this vein.

“Spoto, who did good work on Hitchcock decades ago and has since become a rolling mill of star bios, tries to cleanse [Crawford’s] portrait,” writes New Yorker critic David Denby, “separating rumor from fact, alleged hysteria from garden-variety unhappiness.

“Must we hate Crawford? Must we think about Crawford at all? Few men go weak in the knees dreaming about her, as they might with Lana Turner or Rita Hayworth; nor is she the kind of woman men could imagine bantering with blissfully as a lover, as they might with Katharine Hepburn or Barbara Stanwyck. She’s the date who raises your blood pressure, not your libido.

“Yet if Joan Crawford is not very likable she would, in a just world, be widely honored for a series of fiercely effective performances and for her emblematic quality as a twentieth-century woman. She was no feminist, but, willy-nilly, she got caught up in the dilemmas of strong women who are also the kind of highly sexual women who need men.

“In her more than eighty movies, she played flappers, working girls, adulteresses, matrons, and, most notably, the anguished heroines of melodrama. Any call for justice to Joan Crawford, however, runs into a dead end: the image of her as a madwoman is too juicily entertaining to give up.

“In 1978, the year after Crawford died, her estranged and disinherited adopted daughter Christina, a failed actress, produced a venomous portrait, “Mommie Dearest,” which alleged both physical abuse and a series of bizarre tests and punishments. In 1981 the director Frank Perry made the sensationally vindictive movie of the same title in which Faye Dunaway, her career as a star fading, grabbed at a chance for glory, or at least notoriety, by launching herself into a spangled caricature of Crawford.

“The collective memory of Crawford quickly hardened into the remorselessness of camp.”

Postscript: I had heard stories all my life about Grace Kelly, the hottest blonde in Hollywood history, having had affairs with almost all of her leading men, and then along came party-pooper Spoto, plausibly debunking most of them. But I don’t want truth and realism — I want magic! I want to hear stories about Gary Cooper‘s portable dressing room rocking with passion during the shooting of High Noon. I know now that the tireless and scrupulous Spoto is averse to this sort of thing, and that’s fine, but that’s also why I’m off the boat.