This is old material but before listing HE’s best and worst Blurays of 2010, I need to re-acknowledge an unpleasant truth. While I’m perfectly happy with Blurays of older films that look like “film” (i.e., restored, cleansed of dirt and detritus, haven’t been digitally scrubbed to excess), I despise the ones that look like 16mm films shown at Howard Otway‘s Theatre 80 in 1979. And in my heart of Philistine hearts, I can’t help but love those Blurays that make older films look cleaner, sharper and more robust than they probably looked during initial release. 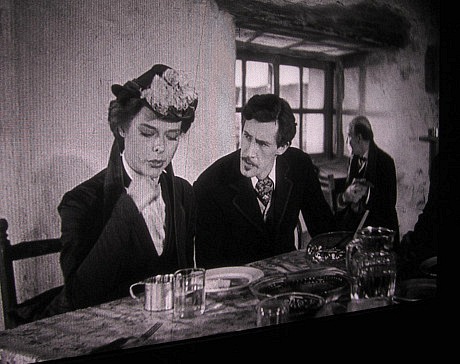 I’m sorry but this is what my primitive, insufficiently developed home-video taste buds tell me when I sit down and watch.

My 2010 list of Blurays that I enjoyed and respected but didn’t exactly open up the windows and sing sonnets about include Fox Home Video’s Alien trilogy, Sony Home Video’s The Bridge on the River Kwai, Criterion’s Paths of Glory, The Thin Red Line, Black Narcisssus and The Red Shoes, Paramount Home Video’s Three Days of the Condor, Warner Home Video’s Dr. Zhivago and The Exorcist, and MPI’s Twilight Zone box sets (blue and red).

There are probably another 20 or 25 that I could mention but I have a 12:30 luncheon to get to and I’m pressed for time.

My understanding is that WHV didn’t distort or digitally scrub the original Treasure of the Sierra Madre elements but (as they did with the Casablanca Bluray) simply did an expert job of enhancing the basic monochrome values. But Universal did indulge in at least some digital scrubbing for their Psycho Bluray (you can tell), and a good deal of it with their derided Spartacus Bluray, according to restoration maestro Robert Harris. I know this is the wrong thing to say but while I agree with Harris that what was done with Spartacus wasn’t respectful of Russell Metty‘s original Super Technirama capturings, I rather like watching it because it’s nice and sharp and vivid. Put me in jail.

Which also means that while I know the notorious Patton Bluray is “bad,” I know when I pop it in that every digitally-refined detail is going to satisfy my inner hot-dog-eating Eloi. I’m going to sit there and go “cool.” If I had a 60-inch plasma and could see how the original photography has been digitally mauled, I would have a different view but I don’t — I have a 42-inch Panasonic plasma, and that much-despised disc looks pretty good to me.

HE quotes from articles about the 2010 Bluray standouts:

“Warner Home Video’s Sierra Madre Bluray is the most exquisitely finessed, luscious-looking black-and-white film I’ve seen in high-def since WHV’s Casablanca. The needle-sharp detail and mine-shaft blacks are magnificent. There are some dupey portions but nothing to worry about — most of it is pure pleasure. It’s so crisp and alive-looking, so perfectly honed and lighted that you can enjoy it entirely for the visual benefits alone. Which you wouldn’t want to do, of course, but I’m just sayin’.” — “2010’s Best Monochrome Bluray,” 9.28.10. 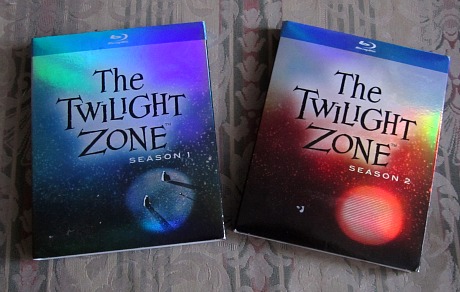 “If you step back from the screen — sit three or four feet away, I mean — the Spartacus Bluray looks way better than the Criterion DVD or the laser disc or any other home-video version that I’ve ever seen. For the first time since seeing Harris’s restored print on a big screen, I felt dazzled by some of the images. I was saying to my son Dylan, ‘I’m not supposed to like this but whoa…look at that!’ Harris will probably get angry, but this Spartacus delivers some of the sharpest, most gleaming and best-looking pop-out images I’ve ever seen of Stanley Kubrick‘s 1960 film outside of a theatre. As long as you keep your distance from the plasma screen, I mean. And especially if you squint a bit.” — “Wrong Response,” 6.1.10.

“The Studio Canal/Lionsgate Bluray of Alexander McKendrick‘s The Ladykillers is a strawberries-and-whipped-cream nightmare — perhaps the most visually unappealing manipulation of a classic film ever issued. It’s saturated with the brightest and bleachiest white light seen anywhere since the aliens stepped out of the mother ship at the end of Close Encounters. It’s like someone turned down the color key and then poured milk and cherry sauce over the master negative. The effect is one of rosey anemia — a sickly dilution like nothing I’ve ever seen from a 1950s color film.” — “Bleachy Pink Ladykillers,” 3.4.10.

“For me, the greatest Blurays of older films are the ones that look much better than the finest projected image in a theatre could possibly achieve in its original day. And which look better, even, than what the director or studio guys saw in a private screening room when they were catching dailies fresh from the set. That’s what the just-out Psycho Bluray is like. It’s beautiful. Although I still say they should have issued two aspect-ratio versions — one in 1.33, the other in 1.78.” — “Above and Beyond,” 10.21.10.

“Jett, who’s seen King Kong five or six times, walked in and took a look and said, ‘That’s it? It doesn’t look any different!’ I slightly disagree. I think the Kong Bluray looks a little grainier than the 2005 DVD did. Because Blurays always make grain pop through a bit more than it does via DVD or film itself. Grain becomes feister, livelier. The bottom line is that while the monks are applauding the Kong Bluray and calling it an upgrade in image quality, common-man types don’t see it this way and could even make the argument that it’s a step down because every scene is covered top to bottom with digital mosquitoes.” — “King Grain,” 10.4.10.

“How much better looking is this new African Queen than the version that gets shown on Turner Classic Movies now and then? A lot better, I’d say. Some of it looks amazing — sharper focus, smoother textures, no blotchy colors. There are portions that look only slightly or somewhat better because they were matte shots or African location footage to begin with, and therefore were never as clean and well lighted as the sound stage work Huston shot in London, but they still look better than they ever have. And the sound has been nicely enhanced (i.e., the usual scratches, hisses and pops removed).” — “Savoring Luscious Queen,” 3.5.10.

“It may sound extreme to call this an awful Bluray with others giving it a thumbs-up, but I’ll go one better: this is the worst-looking, worst-sounding Bluray of a classic black-and-white film in history. The reason is simple. The Criterion monks used a 1942 nitrate duplicate negative that had squawky sound and titanic grain levels plus all kinds of smudges and wounds and scratches, and then went by their usual creed, which is that ‘whenever the damage [is] not fixable without leaving traces of our restoration work, we elect to leave the original damage.’ Which has resulted in one of the biggest burns in Bluray history.” — “Graincoach,” 6.1.10.