Semi-sincere congratulations are offered to all the Golden Globe nominees. No one on the planet is wholly sincere about this joke of an awards show, but it serves a purpose and is obviously accepted for this. Are the Globes entertaining? Kind of. Diverting? Sure. Amusing from a distance? Okay. Harmless? Mixed opinion. They help out certain films and performances, but they also insert, I feel, a kind of poison into the bloodstream. 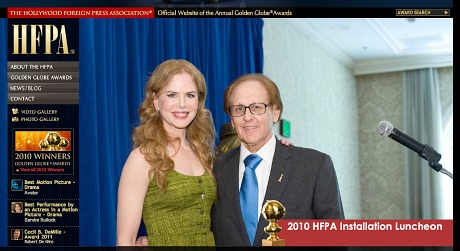 Unethical, whorish, an annual laughing stock and in some instances categorically insane — the Hollywood Foreign Press Association has it covered. We all know about the first three, but the HFPA’s idea of what constitutes a comedy has gone beyond odd and into the Valley of the Deranged. But because their award telecast helps to sell less-than-surefire-commercial movies to the schmoes and shore up Oscar cred, the film and TV industry industries work with these clowns each and every year.

I heard yelps of astonishment a few minutes ago when the nominations were announced and three were handed to The Tourist, which the HFPA regards as a comedy. (It has a slightly jaunty tone with a glamourish sheen.) The Tourist was nominated for Best Musical or Comedy, and costars Angelina Jolie and Johnny Depp were nominated for Best Actress and Best Actor, respectively, in a Musical or Comedy.

The Comedy/Musical category has been notoriously elastic in years past, but this feels to me like a new HFPA low. The Tourist has been slaughtered by critics, has under-performed at the box-office and is generally regarded as an embarassment. The HFPA sluts want Jolie and Depp to attend the telecast, of course, and they’re counting on people rolling their eyes and letting it go.

I like and respect most of The Kids Are All Right — it’s an above-average family relationship piece with rich performances, affecting emotion and intriguing sexual contours. But the HFPA is calling it a comedy, having given it a nomination for Best Picture (Musical or Comedy) and nominations for Best Actress (Musical or Comedy) to costars Annette Bening and Julianne Moore. This is sheer reality-defying political calculation.

The darkest stories have little trickles of humor. The perversity is in the HFPA exploiting this tendency to suit its own ends. By the HFPA’s standard Macbeth is a comedy/musical because of the “knock knock” scene.

The political idea behind the Kids Are All Right noms, of course, is to spare Bening and Moore from having to compete against Natalie Portman, Michelle Williams, Nicole Kidman and Jennifer Lawrence in the dramatic category, and to assure that one or the other will win. It’s a completely corrupt inside move, but as long as the fix is in the HFPA should declare a tie and give the award to Bening and Moore. It would be the fair thing, and Scott Feinberg would approve.

I for one heartily approve of both Amy Adams and Melissa Leo getting nominated for Best Supporting Actress for their Fighter performances. The truth is that Leo’s performance as Wahlberg and Bale’s headstrong, chain-smoking mother is the livelier of the two, but not as likable or engaging as Adams’ girlfriend character, Sharlene. Adams is all about loyal, blunt and tough — the antidote to Leo’s bad-mom tendencies.

Lesley Manville (Another Year) didn’t make the cut. A real shame. She was also omitted by the BFCA nominations. She could conceivably land a Best Actress Oscar nomination (and let’s hope she does), but the concerns I shared on 10.27 and 11.20 about what may happen are apparently starting to come true. Sony Classics, no offense, should have put her up for Best Supporting Actress.

The Kings’s Speech garnered the most nominations, followed by The Fighter and The Social Network.

The HFPA’s Best Picture (Drama) nominations are correct — Black Swan, The Fighter, Inception, The King’s Speech and The Social Network. If the Oscars still had five Best Pic noms, this is what they might be.

The HFPA has nominated Burlesque, a drop-dead awful film, for Best Picture (Musical or Comedy)…naturally! The other nominees are also a bit weird. Alice in Wonderland is spirited and bizarre but in no way “funny.” Red isn’t funny in the least — it’s horribly depressing. Why didn’t the HFPA nominate an actual comedy (like Due Date) or musical?

Mark Wahlberg (The Fighter)…Wahlberg and Gosling!

Here are the rest. The nominees list is everywhere. I have better things to do with my time than sit here like a stooge and type this stuff out.