I have a slight Out of Sight problem. I can’t remember much of the basic story, only story pieces. George Clooney goes back to jail at the end but he meets an expert jail-breaker in the paddy wagon — I remember that. And Clooney and Jennifer Lopez talking and half-flirting in the car trunk, and talking at one point about Robert Redford “when he was young.” I remember Michael Keaton‘s not very bright FBI agent, Ray Nicollette. And a fat criminal falling on the stairs and accidentally shooting himself. 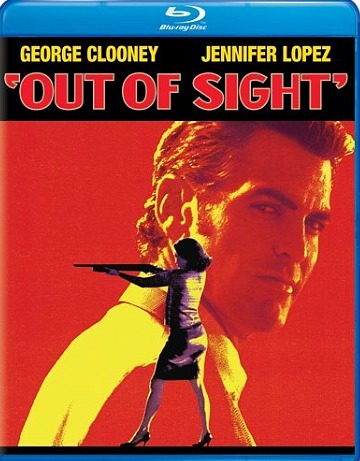 I remember Dennis Farina‘s character, a lawman who’s Lopez’s dad, noticing that Keaton is wearing a T-shirt that says “FBI” on the front and saying “Hey, Ray, do you ever wear one that says ‘undercover’?”

Except the Bluray doesn’t even come out until March 1st. That kinda sucks.

Out of Sight was released 12 years ago. Time flies. Clooney looks young with the bop haircut and all.

Clooney: “I know a guy who walks into a bank with a little glass bottle. He tells everyone it’s nitroglycerine. He scores some money off the teller, walks out. On his way out, the bottle breaks, he slips on it and knocks himself out. The ‘nitro’ was Canola oil. I know more fucked-up bank robbers than ones who know what they’re doing. I doubt if one in twenty could tell you where the dye pack is. Most bank robbers are fucking morons.”