Stare Those Gurus Down

Last Friday Awards Daily‘s Sasha Stone bravely became the latest significant voice to question the mule-ish insistence by several Gurus of Gold that The King’s Speech is the odds-on favorite to win the Best Picture Oscar. And she did so by pointing to an apparent change in Academy thinking that began to manifest in 2006 — a change that those feet-stuck-in-cement Gurus seem reluctant to acknowledge. 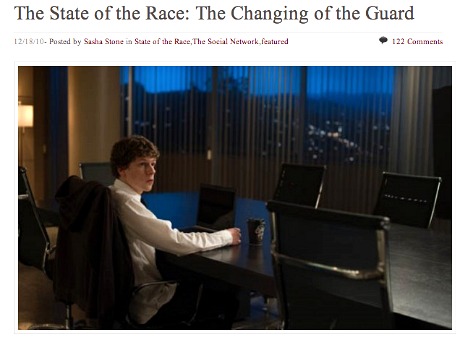 “If I could name one of the biggest changes I’ve seen since 1999, when I first started covering the race annually,” she begins, “it would be this: after Brokeback Mountain lost to Crash, there was a shift in how the Academy chose its best picture. It became less about what they ‘liked’ and more about what they thought was the ‘best.’

“Since then, their choices have been about great filmmaking — directors working at the top of their game, with an assured hand, in complete command of their story. Their choices seem to continually baffle awards watchers, or, specifically, the Gurus of Gold – a group assembled to be the experts in how the Academy votes. But they seem to be always questioning the Academy’s ability to know a great film when they see one, choosing instead to view them as an infantilized group that can’t handle ambiguity of plot, complexity of story, and mostly, a deliberate lack of a feelgood component. They haven’t seemed to notice because every year there is continued doubt that this movie or that movie can win.

“Judging by the last several years, one would have to be asleep at the wheel to not notice how the Academy has changed, how its choices have become more thoughtful, how much more important critically acclaimed films have become,” Stone concludes. “It is not just about the emotional payoff anymore. I’m not saying it isn’t going to shift back. It very well might do that this year. But there is no recent precedent to suggest, as David Poland did the other day, that ‘no way can The Social Network win Best Picture.’

“He seems to be reverting back to the days when the critics really didn’t matter so much because they were so far out of whack from the Oscars it wasn’t worth counting them. I myself used to write ‘Academy voters are not critics.’ But that paradigm has shifted. As Oscar watchers we must adapt and evolve to the way the Academy itself is changing, otherwise we are our own worst problem, not that they weren’t already.

“Those I heard saying The Departed, No Country For Old Men and The Hurt Locker couldn’t win were Oscar watchers, for the most part, experts who are supposed to be good at reading the Academy. But here we are, heading into another year where a film is doing extremely well with the critics, has a director who will likely be the frontrunner for the DGA — a film that is critically acclaimed by Film Comment, Roger Ebert, Kenneth Turan, the Boston Film Critics, the Chicago film critics, the LA film critics, the NY film critics — and still [many of the Gurus] are saying it can’t win Best Picture.”

On 12.20, Indiewire‘s Anne Thompson, one of the Guru hold-outs, wrote the following: “To those who say that The Social Network ‘S huge success with critics presages an Academy Award Best Picture win, let me remind that critics are not Academy members. All this success is helping the movie, no question, but it doesn’t change the fact that The King’s Speech remains a soft lob down the middle for Academy members. They love this movie. So don’t count it out just yet.”