The casting of Clint Eastwood‘s Hoover is getting loonier still. It was nutty enough that the six-foot-tall, broad-shouldered, Germanically-featured Leonardo DiCaprio was cast as the short (5′ 7″), bulldog-resembling, perpetually middle-aged J. Edgar Hoover. But now The Social Network‘s Armie Hammer, who stands 6’5″, has been cast as Hoover’s lover, Clyde Tolson. As the photo below (initially used by Award Daily‘s Ryan Adams) seems to indicate, Tolson was two or three inches taller than Hoover, or maybe 5’10”. 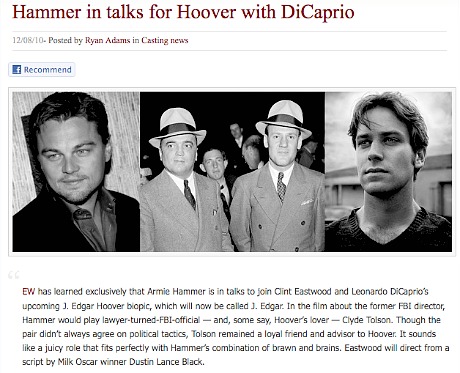 So proportionately, DiCaprio and Hammer are a kind of fit. But otherwise they seem way off the mark. These are two young, well-built, relatively imposing glamour boys playing a couple of pudgy, modestly-proportioned dorks who apparently didn’t have the courage to fuck each other. One solution, a la Marion Cotilard as Edith Piaf in La Vie en Rose, is to make DiCaprio-Hammer seem shorter with large-size furniture, extra-high door frames and other props that will simulate men of a shorter height.

It just feels bizarre that a couple of exceptionally handsome, almost model-pretty guys with basketball-player frames and the usual glamour-swagger are going to play a couple of closeted bureaucratic assholes whose features were dull and rigid, or at least cautious — faces that seemed to exude the very antithesis of ease and glamour. I know, I know — Warren Beatty bore almost no resemblance to Clyde Barrow, but this kind of casting discrepancy used to be the exception.

I’ve noted before that the long-standing Hollywood law of casting famous-person roles with actors who bore at least a faint resemblance to the people they were playing (Henry Fonda as Abraham Lincoln in Young Mr. Lincoln, Broderick Crawford as Hoover in Larry Cohen‘s 1977 biopic , Charlton Heston as Andrew Jackson in The Buccaneer, James Stewart as Charles Lindbergh in The Spirit of St. Louis) is pretty much out the window these days. Anyone of any size, shape or ethnic heritage, it seems, can play anyone of any size, shape or ethnic heritage. Nothing matters. The Greek-Italian Gwen Stefani playing the milk-fed and totally Midwestern-looking Jean Harlow in Martin Scorsese‘s The Aviator was a sloppy joke, and yet representative of the current casting norm. Anything goes for the most part. Kelsey Grammer as William Shakespeare, Madonna as Eleanor Roosevelt, Pee-Wee Herman as Thomas Jefferson…why not?

Last April I reported about Dustin Lance Black‘s Hoover script. “The scenes between Hoover and FBI ally/colleague/friendo Clyde Tolson (whose last name Black spells as ‘Toulson’) are fairly pronounced in terms of sexual intrigue and emotional ties between the two,” I wrote. “Theirs is absolutely and without any qualification a gay relationship, Tolson being the loyalty-demanding, bullshit-deflating ‘woman’ and Hoover being the gruff, vaguely asexual ‘man’ whose interest in Tolson is obviously there and yet at the same time suppressed.

“The script flips back and forth in time from decade to decade, from the 1920s (dealing with the commie-radical threat posed by people like Emma Goldman) to the early ’30s (the focus being on the Charles Lindbergh baby kidnapping case) to Hoover’s young childhood to the early ’60s (dealing with the Kennedy brothers), the mid to late ’60s (Martin Luther King‘s randy time-outs) and early ’70s (dealing with Nixon’s henchmen). Old Hoover, young Hoover, etc. Major pounds of makeup for Leo, I’m guessing.”