I don’t know how old this report is, but it’s a more-than-worthwhile visit with Social Network composer Trent Reznor by N.Y. Times “Carpetbagger” Melena Ryzik. Best Picture is a lost cause, but it would be terrific, at least, if Reznor could win the Oscar for Best Score.

An hour ago I was sent a link to the first image of Ben Affleck and Rachel McAdams from Terrence Malick‘s untitled love story (which I thought was going to be called The Burial…no?). I’ve been asked to report that FilmNation Entertainment is handling international sales. Pic costars Olga Kurylenko, Javier Bardem and Rachel Weisz. 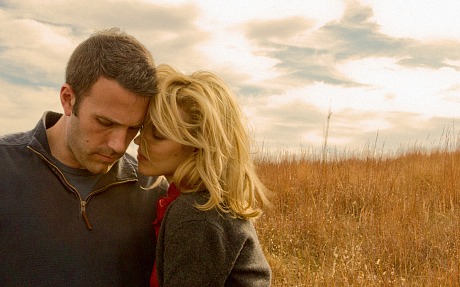 Ben Affleck, Rachel McAdams in Terrence Malick’s Oklahoma-set love story. Pic wrapped in late ’10, is expected in theatres sometime in 2013. Okay, I’m kidding but anyone who expects to see this puppy before fall 2012 is probably dreaming.
February 23, 2011 1:35 pmby Jeffrey Wells

12 Comments
Snuck Up On Me

The above comes from Tom O’Neil’s latest Gold Derby survey.

You can’t trust trailers, but you can tell right away from this redband version that Jake Kasdan‘s comedy (Sony, 6.24) might be fairly decent. Maybe. Obviously raunchy. Cameron Diaz‘s second line coupled with a shot of a high-school sign that says “Home of the Jammers” makes the point. It feels like a comedic riff on Diaz’s In Her Shoes character. Justin Timberlake seems funny and assured; Jason Siegel is obviously getting fatter and fatter.

The question everyone will be asking, of course, is how do you launch a Saturn V rocket without anyone noticing? You’d have to blast off from some super-remote location, and that would mean hauling billions of dollars worth of NASA equipment and manpower off to this godforsaken spot. Quite an undertaking. Come to think of it, who wouldn’t notice all that money being spent?

I’m sorry, but this looks like cereal-bowl slop to me. It produced by the notorious Timur Bekmambetov, director of Wanted and the soon-to-shoot Abraham Lincoln: Vampire Hunter. The director of Apollo 18 (which opens on 4.22, by the way) is Gonzalo Lopez-Gallego.

Some people you just can’t trust about comedies, and the guy who told me that the laughs in Hall Pass (Warner Bros., 2.25) are hilariously gross and vile and made him bust a gut is now one of them. He’s a good guy and a smart critic, but he’s off the “trust” list. The next time he tells me some new film is really funny I’m gonna go “cool, fine, thanks for telling me” and then ignore the shit out of every word he’s just said.

I saw this Bobby and Peter Farrelly film last night, and I’m telling you straight and true that although it’s wiser and more balanced than I expected, it’s not especially funny. It’s a reasonably well written and well-acted thing. Costars Owen Wilson, Jason Sudeikis, Jenna Fischer and Christina Applegate are moderately okay. But I got one half-decent guffaw out of it — a guffaw that was more about saying to myself “whoa, they just tried to get a laugh out of an excremental discharge!” rather than “wow, excremental discharge can be really hilarious!”

Hall Pass is an attempt by a couple of older guys with a little wisdom and life experience under their belts to deliver some kind of raunchy-outrageous sex comedy about married life that might appeal to both younger and older guys and perhaps even resuscitate some of that old Something About Mary pizazz. But the Farrelly’s have become older guys (Peter is 56, Bobby is 53) in more ways than one. They’re no longer into situational farce for its own sake, and have basically become social realists who listen to their own observations and make movies about the banality and limitations of life, or what I would call the awful truth of things.

Everyone knows the premise by now. Wilson and Sudeikis are a couple of obsessives with bad clothes and sappy haircuts who live in Providence, R.I., respectively married to Fischer and Applegate and constantly dreaming about boning other women. Eventually the wives, frustrated by their husbands’ adolescence, accept the advice of a best-selling pop psychologist (Joy Behar) and give little hubbies a week off from marriage — i.e., a 7-day freebie.

I enjoyed the company of Fischer and Applegate much more than that of Wilson and Sudeikis because the women, at least, have a semblance of maturity and self-awareness whereas the guys are just deluded tools. I also felt more satisfied with scenes in which the wives, who’ve gone with their kids to Cape Cod during the weeklong hiatus, get lucky themselves and have to grapple with cheating and guilt and so on.

Question: why don’t Wilson and Sudeikis simply hire a couple of expensive pros to hang with for seven days? They apparently have a couple of grand to throw around so why not? The dumbest guys in the world understand that the odds of 40-something types getting lucky right away are not high, and that even if you meet a nice prospect it might take two or three weeks to close the deal. What idiot with only seven days to romp around wouldn’t engage a prostitute?

Wilson and Sudeikis are not the kind of characters I can identify with and/or accept as some kind of stand-in. Suburban dorks, delusional, too unaware, too slow. I’m cooler and smarter than these assholes any day of the week.

Most of the laughs in Hall Pass are saying that most middle-aged married guys who dream about cheating and horn-dogging are semi-pathetic frauds who just haven’t the necessary nerve or selfishness or imagination to score, for the most part. Or even get lucky. Because when Wilson and Sudeikis do luck into something, they turn into softies who just want to run home to their wives and the safety of their beds and the usual routines and falling asleep at 9:30 pm on Saturday nights.

Not only is much of this film not funny, but some of it is mildly depressing. And there’s one visual gag — a bit that makes a point about moderately attractive women preferring to surround themselves with homely friends at clubs so they’ll look better by contrast — seems flat-out cruel and misogynist. I’m not going to explain in any detail, but it’s rare when a gag makes me actually recoil and say “what?” to myself, as in “do the filmmakers realize what they’re putting out here?”

In a way this movie is like one of those Warner Brothers prison dramas from the ’30s with George Raft and Jimmy Cagney. Forget Hall Pass — they should call it Each Dawn I Die. It’s a film about a couple of inmates in their early 40s who are stuck and confined and have nowhere to go except toward a renunciation of adolescent hormonal lust and a kind of passive acceptance or submission to the fact their poon days are over and done with. Love and trust and safety and security aren’t bad things, obviously, but there’s also something immensely depressing about a couple of would-be Lewis and Clark types getting spooked by the sound of the first squirrel and running back to the safety of home sweet home.

MSN doesn’t like to timestamp, but they’ve recently posted another cogent summary of the Best Picture race, this time from the highly perceptive Glenn Whipp: 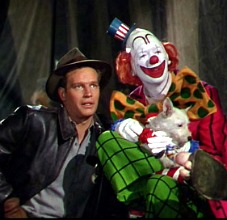 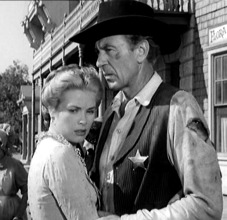 “The template for this year’s Oscar race was carved in stone in September when The King’s Speech premiered at the Telluride Film Festival and The Social Network opened the New York Film Festival. In one corner, you had a film that had seemingly checked off every box in its appeal to Academy voters — Royals! Period piece! Lofty British drama! Triumph over disability! Triumph over Nazis! — and, in the other, you had a movie with an unlikable, socially awkward genius protagonist directed by David Fincher, an unlikable, socially awkward genius director.

“That dynamic — young vs. old, Facebook vs. Mr. Darcy — hasn’t changed in the ensuing four months. And even with the late entry of three critically acclaimed box-office successes — True Grit, Black Swan and The Fighter — this year’s best picture trophy will recognize either the emotional uplift of The King’s Speech or the exhilarating immediacy of The Social Network.

“And, from all appearances, it looks like voters are going with their hearts and not their heads.

“Time will tell whether a win for King’s Speech will be a source of embarrassment to the Academy akin to, say, Ordinary People beating Raging Bull or Dances With Wolves prevailing over Goodfellas. I’d argue that Fincher’s movie is nowhere near as accomplished as the two Scorsese films and that naysayers undervalue all the ways Speech goes against conventionality. But Social Network supporters tend to stamp their feet when differing viewpoints are offered, so my reasoning would probably fall on deaf ears anyway.”

Fincher is unlikable? Where does that come from? He’s never been anything but warm and gracious with me.

I wrote a Weinstein chum this morning about attending a couple of the Weinstein events this week. Not to show repentance about my King’s Speech opinions (i.e., very good film but shouldn’t win the Best Picture Oscar), but to simply say “hi” and smile and pat friends on the back. “I’m speechless at your note,” she replied. “From reading your site faithfully, TWC parties are the last place I’d imagine you’d want to be.” “Aww, come on,” I replied. “My Hollywood Elsewhere routine is about work and religion and call of duty, and parties are about sociability and hanging-with-pallies and relationship fortification and fizz-fizz-fizz. You know how it goes.”

Sidenote: The song, released in March 1963, was sung by Lou Christie.