Since writing Wednesday’s story about whether Arthur‘s teaser poster misleads by omitting Greta Gerwig, the ostensible female lead (i.e., she plays the same role that Liza Minnelli had in the 1981 original), a friend sent me a 10.17.09 draft of Peter Baynham‘s 117-page script. I read it right away, and without being too specific I can confirm that Gerwig does indeed have the “Minnelli role” in this draft, which is to say the dominant one as far as a third-act resolution is concerned. 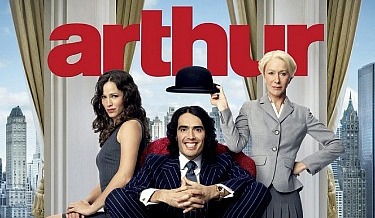 To repeat, a Warner Bros. spokesperson said yesterday that the current poster is a teaser, and that another piece of Arthur art (possibly to feature Gerwig) will be seen down the road. But the fact remains that for the time being, Warner Bros. marketing has (a) kept the romantic female lead off the poster and (b) shown the secondary female lead (i.e., Jennifer Garner) instead, obviously because her name means something to Eloi ticket buyers while Gerwig’s means zip. Unless Jared Stern’s rewrite of Baynham’s script has switched things around entirely (which is highly unlikely), this is a deliberate hoodwink maneuver as far as your average ticket-buyer is concerned. I’m not saying a major studio hasn’t done this before, but I can’t think of any examples.

The teaser trailer pretty much eliminates Gerwig also. She’s seen in two brief cuts early on, and has one line (“Who are you people?”). The basic impression is that Arthur is a three-way relationship story between Russell Brand, Helen Mirren and Garner.

Gerwig will almost certainly benefit from Arthur, as any lead actress in any half-decent, studio-funded romantic comedy would. (For what it’s worth, Baynham’s script is spirited and funny-dopey — not a half-bad “read.”) But marketing-wise she’s definitely being shafted as we speak.

Or, if you need a parallel for a young actress just breaking in (as Gerwig is into the big-studio realm), it’s like a poster for Billy Wilder‘s Sabrina (’54) showing Humphrey Bogart, William Holden and Martha Hyer (who plays a romantic also-ran)…but not Audrey Hepburn.