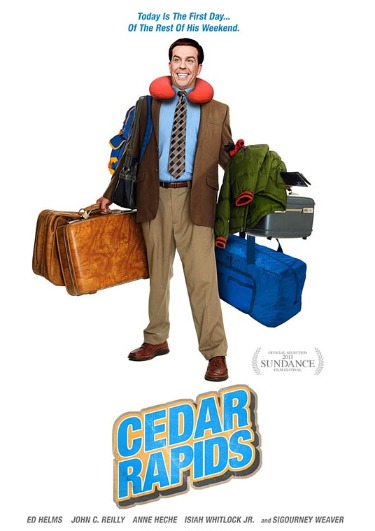 I’m serious about Reilly’s howlingly funny performance. I wrote last month that “it’s good and triumphant enough to be called the first Best Supporting Actor-level turn for 2011. The man is a genius at this sort of thing. The second he arrives on-screen you’re going ‘uh-oh, here we go.'”

My other Sundance verdict was that Cedar Rapids could have been even more if the third-act was more successful, but that, to me, was only a mild regret because at least it’s operating in the ethical comedy realm that Billy Wilder and Preston Sturges used to excel at.

Marshall Fine has called it “the first worthwhile comedy of 2011 – funny, dirty and full of heart. How can you beat that combination?

“Despite some of the raunchiest dialogue in recent memory, there’s an undeniable sweetness to Cedar Rapids that makes it hard to resist. The fact that it is consistently, inventively funny doesn’t hurt.

“Much of that sweetness – and yes, even innocence – can be credited to Helms’ performance as Tim Lippe, an innocent abroad, or as far abroad as Cedar Rapids is from his hometown of Brown Valley, Wisconsin. Helms is the new master of playing naive guys who aren’t as dumb as they look but also aren’t as smart as they think. He stole The Hangover from Zach Galifianakis and regularly finds comic gold in episodes of The Office.

“He’s not exactly Candide, but there’s a sheltered, optimistic quality to Helms’ [character] that goes beyond the writing to become something identifiable and worthy, as well as quite amusing.”