I’d like to know who designed this poster for Kelly Reichardt‘s Meek’s Cutoff (Oscilloscope, 4.8) because it works. It has a certain authenticity, a yesteryear quality. It suggests the look of a poster for…I don’t know, some Lillian Gish or Gloria Swanson film from the 1920s, Queen Kelly or Orphans of the Storm or something in that vein. 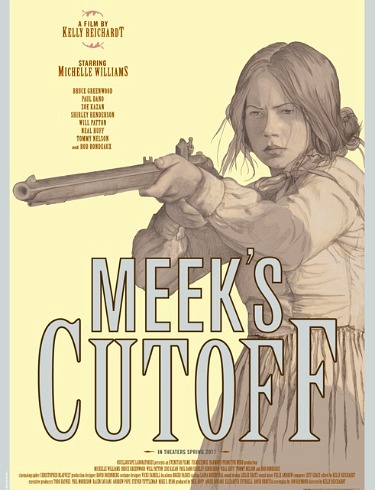 I managed to miss this film at last year’s Toronto and New York film festivals, and also at Sundance 2011. The truth? I didn’t want to see it because of the bonnets. Here’s how I explained it on 9.29.10:

“Here comes another immensely shallow but entirely honest statement from yours truly,” I wrote. “The instant I clapped eyes on those mid-1800s women’s bonnets in those stills from Meek’s Cutoff, I said to myself, ‘I’m going to figure some way of avoiding this film for as long as I can.’

“I suspected it would be a quality-level thing because Reichardt’s Wendy and Lucy proved she’s a talented, dead-serious director. Attracted to downer-type women-facing-tough-odds stories, okay, and not exactly into narrative propulsion, but Reichardt’s films require respect and attention.

“And I didn’t care. I was going to avoid Meek’s Cutoff any way I could for as long as I could because I don’t like the gloomy symbolism of floppy bonnets on pioneer women’s heads. To me bonnets spell sexual repression and constipation and tight facial muscles. They suggest the existence of a strict social code (i.e., the film takes place in 1845) that I don’t want to sample or get close to because I know it’s all about men with awful face-whiskers and the wearing of starched collars and keeping everything buried and smothered and buttoned-up among the wimmin folk.”

Meek’s Cutoff is basically a western in which “a braggart, Stephen Meek (Bruce Greenwood), meets his match in a courageous woman (Michelle Williams) after he is hired by three families to lead them through Oregon’s Cascade Mountains so that they may start new lives on the other side. As their water dwindles and they disagree over the treatment of a captured Native American, the group questions Meek’s dependability and cracks under pressure.”

For what it’s worth I’ve moved past my initial feelings and am now ready to experience Meek’s Cutoff, in large part because of this poster.