Here, in order of preference, are my favorite Sucker Punch judgments. Along with a portion of one of the two or three semi-favorable reviews currently out there, written by Salon‘s Andrew O’Hehir, and which I respect. 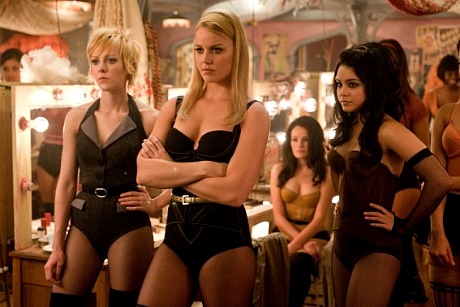 “It might be better to say that all levels of the story in Sucker Punch are self-evidently ludicrous,” O’Hehir’s final paragraph reads, “and that the point of the movie is the vertiginous thrill ride that takes us through them. If you want to understand Snyder’s central narrative gambit, it’s right there in the title. He gives us what we want (or what we think we want, or what he thinks we think we want): Absurdly fetishized women in teeny little skirts, gloriously repetitious fight sequences loaded with plot coupons, pseudo-feminist fantasies of escape and revenge. Then he yanks it all back and stabs us through the eyeball.”

Some Came Running‘s Glenn Kenny: “You know, I didn’t exactly have high hopes for Sucker Punch, but I wasn’t expecting it to EAT MY SOUL. Good lord, it is ghastly!”

Chicago Tribune critic Michael Phillips: “Director/co-writer/co-producer Zack Snyder must have known in preproduction that his greasy collection of near-rape fantasies and violent revenge scenarios disguised as a female-empowerment fairy tale wasn’t going to satisfy anyone but himself. Well, himself, plus ardent fans of Japanese-schoolgirl manga comics. ‘Close your eyes. Open your mind. You will be unprepared,’ is the movie’s ad slogan. Indeed. You will be unprepared for a film packing this much confusing crud into a little less than two hours of solitary confinement, which feels more like dog hours, i.e., 14.”

Village Voice‘s Nick Pinkerton: “[Snyder’s] mash-up set pieces blend into so-awesome-they’re-awful slo-mo monotony, and the awful sisterhood stuff in between makes you anticipate the action as though waiting for the bus.”

Philadelphia Inquirer‘s Stephen Rea: “A barrage of green-screen effects, comic-book portentousness [and] brain-dead delirium, Sucker Punch is hands-down the most nightmarishly awful film of the year.”

Entertainment Weekly‘s Lisa Schwarzbaum: “The music screeches, the actors vamp, the knives and weapons and bombs and fireballs fly around the screen. Meanwhile, the well-prepared moviegoer slips into her or his own private fantasy of a world in which movie effects are themselves locked away in an institution for the criminally insane until such time as those effects are really, truly necessary for the story.”

God, I can’t do this any more…it’s too depressing. I have to leave it.