I’d always wanted to see Fred Zinneman‘s A Hatful of Rain on a big wide screen (rather than on a small television set, which is what I saw it on when I was 15) because it’s in black-and-white Scope — my favorite format. So I caught it last night at the Aero, and briefly spoke with star Don Murray (who’s looking very fit and vibrant at age 82) and listened to a q & a with Murray and costar Eva Marie Saint. 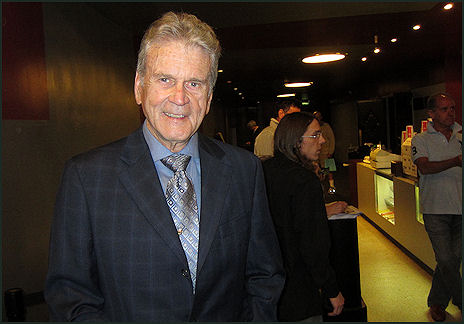 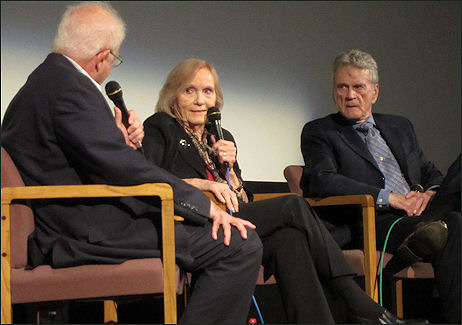 Released in 1957 and set mostly in a small lower-Manhattan apartment, A Hatful of Rain is an on-the-nose melodrama about middle-class drug addiction. Murray plays Johnny Pope, a married Korean War veteran in his mid 20s with a heroin habit that keeps him out at all hours. His brother Polo (Anthony Franciosa) has helped him score for months out of misplaced sympathy, and in the process has blown $2500 that had been loaned by their father (Lloyd Nolan), who’s just come up from Florida to visit. And Pope’s wife Celia (Saint) suspects that he’s having an affair, and is in fact relieved when she finally discovers that he hasn’t been unfaithful in a sexual sense.

The main problem I had with A Hatful of Rain (which is a great-sounding title without thinking about what it might mean) is that it’s not actually about drug addiction as much as 1950s middle-class denial — about the inability of Average Joes like Johnny and Polo to own up to shameful situations and deal with them straight-on. The ’50s were about everyone trying to live up to a nice white-bread homogenous ideal, about “everything’s okay” and conforming to the norm and not rocking the boat, and boy, is this movie ever about that!

The guilt-wracked Murray and Franciosa feel can’t tell Saint or Nolan what’s actually going on despite abundant indications that something’s way off, and it becomes very, very exasperating after an hour of this. You’re muttering to yourself, “C’mon, guys…lying about being a junkie all the time is much, much worse than facing up to it, no matter how ashamed you might be.” And you have to sit through another 35 to 40 minutes of endless dodging and fibbing and covering up before it all comes out in the wash.

And Franciosa is constantly over-acting, and I mean in a way that says, “I am an actor playing a character and I am going to pretend like hell that I’m feeling all the heavy stuff that I’m dealing with because an audience needs to understand and consider all this.” He’s giving it everything he has and then some, and it’s definitely one of the more painful performances I’ve had to sit through in a long while.

It’s partly Zinneman’s fault, of course — he could have told Franciosa to use a little subtlety and economy, but he didn’t. But on-the-nose emoting was par for the course in the 1950s for all but a very few (i.e., Brando, Dean, Clift). Henry Silva plays “mother,” Murray’s drug dealer, and William Hickey plays Silva’s twitchy-scumbag pally or assistant or whatever.

And yet Michael V. Gazzo‘s script, adapted from his B’way play, is reasonably realistic and well-honed for what it is. It has believable dialogue and behavior that seems palatable and recognizable. And it has a clean and decisive ending. (I’m presuming everyone knows that Gazzo played Frankie Pantangeli in The Godfather, Part II.)

But the Aero’s projection, unfortunately, was a little soft. Or the print was a dupe. Either way it looked okay but not all that terrific. I kept saying to myself, “This is going to look so much better when and if it comes out on DVD.”