Branagh "Steals" My Week With Marilyn

An HE reader attended a research screening last night at Manhattan’s AMC Lincoln Square for Simon Curtis‘s My Week With Marilyn. The British-made drama, highlighted by a knockout performance by Kenneth Branagh as Laurence Olivier, is based on two books by the late Colin Clark about Clark’s relationship with Marilyn Monroe (Michelle Williams) during the making of The Prince and the Showgirl in 1956. 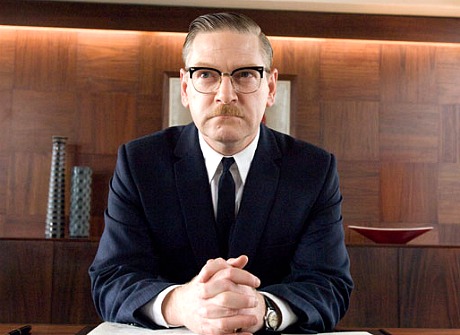 Kenneth Branagh in some period film and not as Laurence Oliver in Simon Curtis’s My Week With Marilyn…although he’ll probably look vaguely similar to this in Curtis’s film, minus the moustache.

It sounds at first glance like an opportunity for a tour de force performance by Williams, but in the view of our correspondent it’s Branagh who stops the show .

“Branagh is the surprise of the film. He’s wonderful as Laurence Olivier — just brilliant. Like Williams, he doesn’t look much like his real-life character but unlike her, he’s aided by superior writing. He also perfectly mimics Olivier’s facial mannerisms and voice and hamminess to the extent that you forget you’re looking at Branagh. He steals every scene he’s in and is the reason to see this movie.”

Otherwise, she says that My Week With Marilyn “reminded me a little of Richard Linklater‘s Me and Orson Welles — same type of yesteryear feeling except that film was semi-fictionalized while My Week with Marilyn is more or less true. The problem, for me, is that last night’s film seemed to be missing the punchline. For me there was no ‘dramatic’ thread.

“Colin (Eddie Redmayne) gets his first job working on a movie, courtesy of family friend Vivien Leigh (Julia Ormond), otherwise known as Lady Olivier, costarring her husband and Marilyn Monroe. Aside from briefly romancing the wardrobe girl, Colin is soon befriended by Monroe. There are a few scenes of him showing Monroe various tourist attractions and then watching her skinny dip in some river somewhere but other than that, the story falls flat.

Laurence Oliver, Marilyn Monroe during filming of The Prince and the Showgirl.

“Colin doesn’t sleep with her. He really doesn’t form any type of real friendship with her other than a superficial camaraderie that takes place over the course of a few days. This is the plot of a movie?

“Williams is an excellent actress but she’s miscast as Marilyn. Although lovely and luminous, she doesn’t have the right bombshell charisma, the traffic-stopping star wattage that made Monroe a celluloid icon. Not only that, the writing for Marilyn is trite and weak — she never comes across as anything but a cipher.”

My Week With Marilyn shot from 10.4.10 to late November at Pinewood Studios and in various London locales. It will probably be released later this year.