“Hesher is not shit — it has its own vision and personality and delivers a form of anarchic-idiot behavior that I’ve never quite seen or contemplated before,” I wrote on 3.16. “And it does have a startling, amusing-at-times Joseph Gordon Levitt performance as a hair-trigger hippie Rasputin slash animal-house provocateur. And a very fierce and touching one from the tweener-aged Devin Brochu. 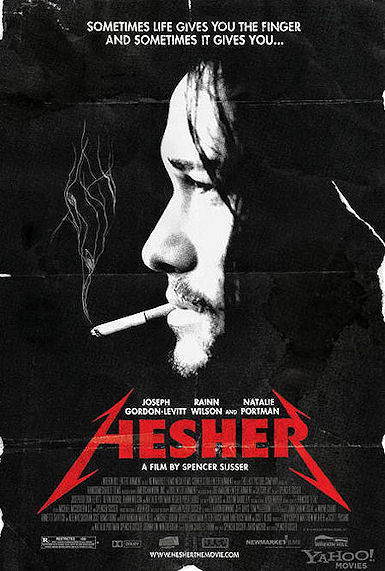 “And there’s some nicely twisted humor going on in the story of Levitt moving uninvited into Brochu’s San Fernando Valley home and gradually rousing him and his depressed dad (Rainn Wilson) out of a stupor-like depression over the death of Brochu’s mom. But Levitt’s numerous provocations seem to be more about fart-lighting improv and acting on whatever extreme-scuzzball instinct has popped into his (or Susser’s) head. It all kinda sorta of pays off at the end, but you have to endure a motherlode of WTF? consternation before this finally happens.

“I also enjoyed/respected the performances by Natalie Portman, a financially struggling checkout girl whom Brochu befriends, and Piper Laurie, playing Brochu’s ailing grandmother and,as it turns out, the one character who seems to “get” Hesher/Levitt most of all. And Wilson’s catatonic dad (who delivers an agonized-crying scene reminiscent of moments in Super) feels like truth every moment he’s on-screen.”

You’d never know it from the website’s front page, but Hesher opens on May 13th.