Awards Daily‘s Sasha Stone and I have agreed to rent a car sometime in the afternoon on the day before the start of the Cannes Film Festival (i.e., Tuesday, May 10th) and drive into the hills above Cannes and Nice and maybe stop for a bite in Saint Jeannet, the smallish village seen from the home belonging to Cary Grant‘s John Robie in To Catch A Thief. 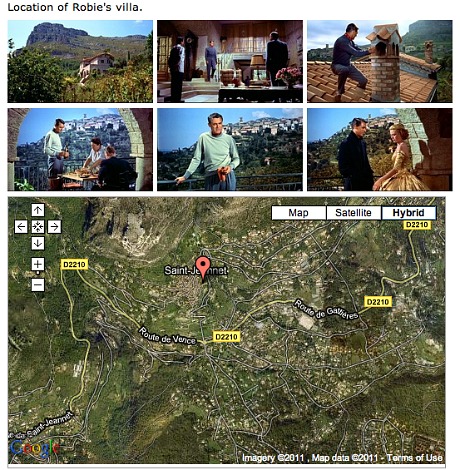 That Act One chase scene (cops in black car chasing Robie’s marooon convertible) in Alfred Hitchcock’s 1955 film is the basic inspiration — i.e., to take the same drive along those winding roads and scenic rocky cliffs. (I’d also like to stop for a minute in Tourettes-sur-Loup.)

We’ll be leaving at 2 pm or thereabouts and returning to Cannes in time for the annual 7:30 pm journalist get-together at La Pizza. If anyone wants to tag along, get in touch. I’m figuring no more than a four-hour trip all together. Okay, five hours. Stone and I are arriving in Cannes fairly early that day so there will plenty of time to get situated and pick up our press passes and whatnot.